Last Sunday, Manchester Town Hall had a lot more going on inside its extravagant walls than the usual conferences. With one of the meeting rooms transformed into the frozen wasteland of Narnia, children aged four and above piled in to join in with an interactive reading of The Lion, the Witch and the Wardrobe. On the arrival of the three characters - the White Witch, her servant and Lucy - there were genuine gasps of excitement from some of the youngest audience members. As they took to the stage, the audience took to their seats. The atmosphere was lovely and the whole event was very family orientated. 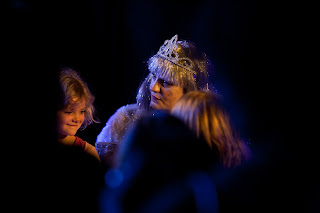 The White Witch began the reading by asking all of her "subjects" to bow down to her. She interacted with the audience throughout: braver children were able to go up on stage and those who were quieter could join in with choral parts similar to in a pantomime. The three actors worked incredibly well with the children, particularly Lucy, who was not much older than some of them herself. They had both children and parents in fits of laughter at times and dealt especially well with a young (no doubt unintentional) heckler!

As well as being a fun experience for all, the reading had some real literary value to it and the actors' interpretation of it was wonderful. It was a truly enjoyable afternoon and leaves the rest of the Manchester Literature Festival with a difficult act to follow.

Throughout the Festival in 2012 we have been working with a group of young people to support them to become digital reporters, and to document a range of events from their perspective. As well as writing blogs and reviews, the young digital reporters have responded to our events using other methods such as photography, illustration and radio.
Posted by MLF Blog at 12:22 PM