History in the making

It feels like the first Monday of winter; cold, dark and damp. The International Anthony Burgess Foundation looks invitingly warm against the dark, maybe even satanic, mills of a lonely Cambridge Street. We come here for historical fiction, and the legends of historical Manchester feel close at hand. It's a small crowd, but it is a Monday, and the setting feels fairly intimate and informal. I have shamefully not read either of the two authors here for discussion, so this is an introduction to their work, which is described as “thoughtful and adroit” by chair Jerome de Groot. Adroit is one of my favourite words. So far, so good.

Katharine McMahon has been writing historical fiction since the 1990s “about war and romance”, though she does not agree with this categorisation of her fiction. More of that later. Katharine goes on to introduce her newest book, Season of Light, by explaining her subsequent inspiration, by real-life events, to write an “Austen-esque novel about the French Revolution”. Her Emma figure, from a new Pemberley, is embroiled in the bloody events across the Channel: “My job as a novelist is to keep the French Revolution alive while the heroine is back in England.” Katharine reads a section, tackling a bloody massacre of priests - a tough and taut passage to hear. I love to listen to authors read their own work, as they heard it in their heads when they first put fingers to laptop; it is exciting and intense.

Andrew Williams is next; he sets an altogether different tone. His most recent historical thriller, The Poison Tide, is set in America and Germany during the First World War. Andrew clearly loves the subject matter; he is like a boy enthralled by spies and James Bond. 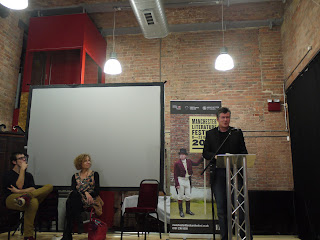 And so the discussion begins. To the question of why they write, Katharine returns to her earlier point: she is “not a historical novelist, especially a romantic historical novelist”. Katharine’s work is fiction, but simply set in a time before ours. She is clearly passionate about this categorisation, and her sensitivity reminds me that historical fiction was not taken seriously by the literary establishment until fairly recently. Her argument rests on the fact that her characters are still the same as those in modern fiction, they simply happen to be acting on another stage.

This transcendence of era boundaries is not the same for Andrew. He has written from a love of history, and was as a child “dragged from abbey to abbey”, resulting in this passion. For Andrew, the “distance and perspective” of history, as well as its constraints, give the novelist a freedom to play with what could have happened; “going places where history can’t”, as in To Kill A Tsar, which depicts the terrorist group that killed Alexander II. He draws on modern experiences; a previous life as a TV journalist has given him experience of terrorism in Ireland and elsewhere. History gives him an opportunity to deal with things too currently sensitive: “I couldn’t write about the IRA, but I could write about terrorists in the 1980s.” I find his argument compelling.

The debate centres on this freedom that writing about history can give you, while constrained by the world of the characters. It seems that this ready-made stage is crucial for these authors, and allows them to write a new script for these actors, while drawing on their backdrop. Both authors use real people differently; Katharine is adamant that, apart from major political figures, real people are not present in her work. Andrew uses them as much as possible, and feels guilty for changing one ending of a book from the “boring” real to a more exciting fiction.

It is fascinating to hear two authors firmly stood at either end of the historical fiction debate – I wonder if this was deliberate on the part of the MLF? Questions from our small audience come swiftly, and the debate continues into publishers’ perceptions of their work, which have clearly forced them into “our slot” of historical fiction. Discussions move on to major historical authors; Walter Scott, Ken Follett and Hilary Mantel (I perform a mental curtsey). I have forgotten that the audience is small, and the mills are dark. I leave with the castles and abbeys of my childhood holidays swirling around my brain, begging for a new story.

Jennie Shorley Carling has degrees in Classics and Ancient History, and works for MMU Business School. She is currently undertaking a PhD and likes writing words and making things. She Tweets @JSho_CfE.
Posted by MLF Blog at 1:48 PM