An Ibex situation has arisen.

By the time the last line of the passage from the fifth author, Edward Hogan's The Hunger Trace was read, I was hooked. An entire row of authors in front of me and the perfect cover of doing a blog with which to ask questions and get quotes? I had already started to consider just paying for the parking ticket which would mean that I could stay and buy all the novels from the shortlisted authors in comfort and spend the rest of the day in literary decadence.

Here's what happens if you do the math for the Portico Preview. There are 13 authors shortlisted. Each author has to do a short reading which both captures the spirit of their book and the audience's imagination. As well as the author's reading, there has to be a introduction to the event and a summing-up at the end and naturally there is only an hour in which to do it. Mission impossible? Maybe not if everyone puts their pedal to the metal and gets on with it but the atmospheric Portico Library is not that the type of place for speed. Portico Library is how libraries should be, how you imagine they would be. I doubt anyone ever goes round telling people "quiet please" in it. From the moment you enter, the urge for a reverent hush overtakes you. I expect the perfect femme fatale to make an entrance at any time for an assignation. By this point of course I realised I had just become too caught up in the hard-boiled modern Manchester gangster world of Tom Benn's The Doll Princess. 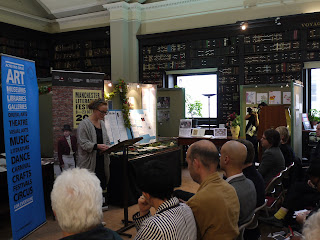 Portico Library has held its prize since 1985 says Lynn Alan, Vice Chair of the Library and the Book Committee. Eight of the shortlisted novelists for this year's prize are with us. Sarah Hall is the fourth author and previous year's winner. She reads from The Beautiful Indifference. "Black as the asphalt in front of ash," she describes Mandy, a girl so hard that she begins, in this collection of short stories, by instructing a friend on how to fight two girls simultaneously and make them both sorry they ever contemplated tangling with her. Prior to that is a reading from A. S. Byatt's Ragnorok: The End of the Gods, a retelling of Nordic Myths.

It is clear the challenge for the author in this setting is very different from individual author appearances during the festival. There is simply no time to cajole the audience. The passage they choose to read has to do all the heavy lifting and whether through suspense, blood and gore, character description or phrasing it has to grip and sustain distinction immediately and through esteemed competition.

Joan Bakewell's She's Leaving Home does it simply when a character remarks how French the word foyer sounds and links it to the actor Charles Boyer. Mark Illis' The Last Word does it in the description of a phone call as no better than someone bellowing through your front door. "These are not my clothes", a character repeats twice in Jackie Kay's Reality, Reality. Jane Rogers, the only writer not to read from the beginning of her book, leaves us in suspense with its premise alone: an act of biological terrorism means that when women get pregnant they die. Joe Stretch's The Adult sounds funny from the get-go as before we're even onto the second page Edward the 7th is called a sexaholic, children hide sweet wrappers in their mother's perm and in a self-grandiose 80s way, a woman says, "They've heard of us." Emma Jane Unsworth (pictured)'s Hungry, The Stars and Everything does it the minute a restaurateur looks in suspicion at a diner requesting a table for one. Surely a sociopath or worse. A Michelin inspector? From the moment the angel said, "You're thinking what's a angel doing in a clap clinic?", Paul Wilson's The Visiting Angel held everyone gripped. Val McDermid was the only author to go for blood and gore instead of suspense and before you knew it the image of a woman's crucified body hanging upside down was now disturbingly planted in your head. "In the middle of the garden staring back at him was the boy who had killed his two-year-old son two weeks ago. He looked astounded. Then I ran": Robert William entry, How The Trouble Started.

There in its steady as she goes way the Portico Preview ended with perfect timing. It would seem that where mere mortals fret about timings and such, the 200-year-old domed beauty of the Library having seen it all before just checklists its credentials. Esteemed alumini including Ian McEwan? Check. Portico Prize Award Dinner, 22nd November? Check. Thirteen gobsmacking entries for judges and readers relish? Check.

Reina Yaidoo is a writer and  entrepreneur. She runs her company Yaidoo Ltd in Manchester.
Posted by MLF Blog at 10:03 AM