Words and photograph by Joely Black.

Did you have an invisible friend when you were young? D’you still remember that friend? Well, that’s probably a good thing, because if you don’t, they might well be out to get you. Welcome to the world of Barry Hutchison, a man whose imagination might have matured, but who can plug straight back into the world of childhood. It’s populated by imaginary friends turned bad, wasps riding spiders and a number of terrifying zombie squirrels.

The Scottish Friendly Children’s Book Tour has brought Barry Hutchison, and his wild imagination, around the country and here for the Manchester Literature Festival and Manchester Children’s Book Festival. After several successful smaller events at schools in the city, he steps up onto the stage at the Z-arts centre in Hulme to wow a crowd of primary school-age children. They are instantly drawn into his world - probably because it’s just like their world.

Barry knows how to tell a good story, and he knows how to deliver a punchline. He has the kids on side from the start. They sit forward on their chairs, eating up his words. He reads only a tiny section from Mr Mumbles, the first in the series of books under the title “Invisible Fiends”. Invisible Friends, sent to a hell full of torture and humiliation, come back in search of the children who first imagined them, seeking vengeance. It’s a brilliant idea, and the children are eager to hear more. He has achieved a very difficult task, and kept a large number of very young children entirely entertained for an hour. 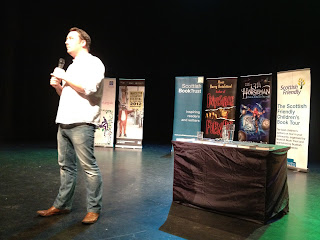 This is my second event focused on children, and it’s a delight to watch authors engage with an audience like this. Forget the polite applause, this is all about the raucous fun that stems from children’s imaginations. Barry tells us stories from his childhood, when he was scared of everything, to his student years, and then to adulthood. Never once does this seem to be above the children’s level, or put them off. They’re thrilled at the chance to ask him questions, and I can see them straining with their hands in their air as he walks about among them, desperate to have their chance to speak. His style reminds me of Horrible Histories, picking on children’s enjoyment of gore and the desire to be horrified and disgusted as well as entertained.

Once outside to sign books, Barry is completely and immediately mobbed by the children. Those who haven’t had the chance to ask a question yet gather around the table, desperate to get close. The books sell out, and they queue up to have their new possessions signed and to get photos taken. Barry is constantly surrounded by several feet of children in every direction. They’re eager, but still polite, corralled by their teachers and the volunteers. Events like these allow children to discover books in a new way, brought to life by the authors themselves. Barry himself says he was inspired by discovering that Roald Dahl worked for a living writing stories. I wonder how many of the children pressing against the table to get the chance to speak to Barry Hutchison will be inspired by his example.

Barry has recently completed a work for older children, The 13th Horseman. He’s being hailed as the next Terry Pratchett and has achieved the very rare accolade of being recommended by Neil Gaiman. I don’t think it can get much better than that.

You can find out more about his work at www.barryhutchison.com, and follow his video blog on YouTube: http://www.youtube.com/user/barryhutchison?feature=results_main

Joely Black is a writer, author and gamer living in Manchester. She has published three fantasy fiction books and is currently working on a post-apocalyptic novel with the author Daren King. She blogs about gaming, fantasy, sci-fi and books at www.joelyblack.com and on Twitter as @TheCharmQuark.

There's another review of this event on the Bookwitch blog.
Posted by MLF Blog at 1:18 PM