These two events were almost companion pieces, each featuring two writers: one from the north west of England and the other from abroad. In the instance of Manchester Letters, it's Chorley's Jenn Ashworth and Istanbul (now Barcelona)'s Nermin Yildirin (pictured below), who have been corresponding about the writing life and writing process for a number of months and who, like all good penpals, have become great mates. Their friendship was recently cemented when Jenn went to a corresponding book festival in Turkey and the pair met for the first time: "The sense of affinity was real," she says. And they genuinely do get on - and are spotted chatting and laughing together over a glass of wine before the next event starts.

The next event is Tramlines, a Comma Press and Literature Across Frontiers project which saw Michelle Green go off and explore Zagreb in Croatia and Roman Simic, relay style, come over here to ride the rails and produce a story. The experiment has been repeated between three other pairs of writers and their tram-networked cities; the fiction journeys through each are due to be published as a phone application in April, with both audio and text versions to be experienced by audiences following in the footsteps of the writers and taking the same trajectory. 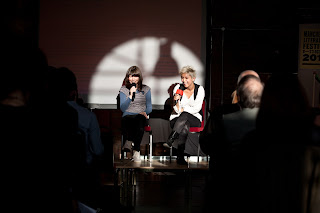 Manchester Letters is currently ongoing, with a couple of missives still to exchange hands, and both Jenn and Nermin explain how enjoyable the project has been, finding out about each other and about the similar processes they experience as writers. Writing to Nermin, says Jenn, cured her of "that post-novel malaise" (she's just finished drafting her third novel The Friday Gospels), and she appreciated the opportunity of going to the Turkish literature festival as it showed how all writers are in the same boat: "There were lots of Dutch writers as well as Turkish, and it was like we were all working at the same desk."

They chat about language and translation, then discuss writing about place. Nermin says: "If Istanbul was a character, it would be bigger than my own character." Jenn's novels are all set in Lancashire: the latest being Chorley. Her debut, A Kind Of Intimacy, is set in Fleetwood, and she says: "People in Fleetwood are probably a bit annoyed with me. It's about the disappointment. For people who know Fleetwood, they know it's not like Blackpool." Her second novel, Cold Light, is based in Preston. "I added a bit of violence to the geography... it's a Preston that's superimposed onto the real place." Still, how important is it to portray facts or reality accurately in fiction, they're asked. Nermin replies: "I am creating my own story - I see things from my own perspective", and Jenn agrees: "Neither of us are setting ourselves up as historians or scientists."

The Tramlines event continues to explore the importance of place in fiction. Michelle's story, In Zero Gravity, follows a woman taking a tram journey across Zagreb, passing the park with the zoo, musing about the Nine Views art installation's planet earth stuck to the side of a bank. But while the Croatian capital and the minute detail of the tram interior and fellow passengers provide the main backdrop, the woman is also thinking about the "photos of places that look like sand" that "he" sends from Sudan, so there's an extra layer of location. In The Boy Who Knew No Fear, Roman offers up snapshots of Manchester life, but he found that "The city's bigger than the tram", and he goes off the grid and to places not connected by the Metrolink network, such as Moss Side.

Of the exchange experience, Michelle says: "It's like being taken around a city by a friend", and she reveals she did start to feel at home there, or at least an affinity to the place, accidentally saying "Croatia!" instead of "thank you!" in shops; some kind of psychological slip? When asked by chair, and Comma Press editor, Jim Hinks whether either of them felt as if they'd lost or relinquished ownership of their cities, Roman says it was really the opposite: "Michelle revealed part of my city to me."

You can read more reviews of these events, by students at the Centre for New Writing, on The Manchester Review.
Posted by MLF Blog at 2:48 PM