I am sitting in the Royal Exchange Theatre and there is a strangely familiar and comforting smell in the air. The whiff of school. Board markers, plastic lunch boxes and hot hands. The smell of a theatre full of excited primary school children who are about to see one of our most popular children's writers, Ulf Stark. Can You Whistle, Johanna?, probably his best known book in Britain, has been published in over 20 languages and remains a bestseller across the world.

My favourite Ulf Stark character is the Inappropriate Mother in Fruitloops & Dipsticks. She wore leopard print to the school PTA and I wanted to be her when I grew up. I look around - I am not the only one... some of these primary school teachers are wearing discreet touches of cool leopard print. 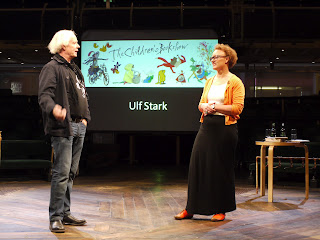 Ulf enters and, in a glorious fuzz of white hair, spiralling fingertips and Swedish, with his publisher translating as he speaks, he tells us that after being bullied by his big brother, he really wanted to be a boxer not a writer! But, of course, writers can get their own back in print, and Ulf explains to us how he has teased his family by including his Dad and his brother, and even his best friend, in his stories. One little boy giggles delightedly behind me.

The children all around me murmur approval of Ulf's stories about his farting brother and other outrageous family events. They appreciate his sense of the ridiculous and the unfair. Yet Ulf Stark's books are startlingly honest about the way children have to face the horror of being the new girl - or boy - in school (Fruitloops & Dipsticks) or the unexpected death of someone they love (Can You Whistle, Johanna?).

Ulf tells us the reason. The street where he grew up had an old folks' home on one side and a fragrant  bakery on the other. For him, that meant that when he looked one way there was life and pleasure and, on the other side, an early awareness of death as the schoolboys were taught to doff their caps to the funeral processions. But his writing has no room for the morbid or the sentimental. More than anything, his stories show us how much the very old and the very young can relish each other's company. Ulf reads to us the passage from Johanna, where Ulf, Bera and the elderly Ned all climb the forbidden cherry tree and sit together companionably on a branch eating stolen fruit. The  relationship between Bera and the old man Ned, whom Bera adopts as his grandfather, creates perhaps the most poignant ending of any children's book, as Bera whistles beside Ned's coffin. Again this passage is read aloud and in the semi dark of the auditorium, it feels as if the audience of children know that they have someone in Ulf who isn't afraid to explore their deepest fears. 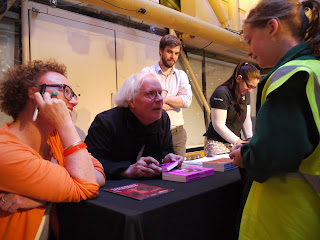 It's question time and, at first, the audience seem shy of asking questions of a real writer. One  little girl eventually puts up her hand and soon there is an avalanche of questions from around the room. They want to know everything about being an author from 'what was your worst book?' to 'who listens to your trial runs?'.  Ulf tells us that now his children have left home, he tries his new stories out on his dog! And, if you want to know, he thinks the worst things he has written are his early poems.

The children milling around after the event have obviously enjoyed themselves. They are chatting about the 10th anniversary poetry competition announced by Sian Williams of the Children's Bookshow (click here for details of how to enter); Webster Primary School for one are planning a lot of entries. Because that is what Ulf Stark does. He doesn't just write stories, he creates new writers. He invites children to listen to their own imaginations and gives them the confidence to tell their own stories. And that is why they love him so much.

Fiona MacLeod is a freelance writer and editor for The Jubilee Press at the University of Nottingham. Her first novel, Impostor (Wardgate Press 2008), has just been optioned for film and television. She blogs here and you can follow her on Twitter @fmmmacleod.
Posted by MLF Blog at 4:07 PM