The great variety of shortlisted blogs up for the newly expanded Blog North Awards is brilliantly demonstrated in the four readings which kick the night off. TV reviews in sonnet form; the horrors of a dreadful boss (and wearing lame), a year in the life of a new young mum, and the sights and sounds of a Yorkshire post round. All these blogs are written in the North and show just why the Blog North Awards exist to celebrate the best of independent online publishing in Northern England.

Organiser Kate Feld (below) of Openstories gets the evening underway by thanking culture-loving partners Creative Tourist and The Culture Vulture plus the judges, including Zoe Margolis, writer and ‘Girl with a one track mind’ blogger, broadcaster and author Stuart Maconie, and head of digital engagement at Guardian News and Media Meg Pickard. The four aforementioned readings are from four shortlisted blogs: Amy Robertson’s I Never Knew You Were Such a Monster, Kevin Boniface’s The Most Difficult Thing Ever, Simon Moore’s Sonnet Reviews and Len Grant’s Her First Year (Len is accompanied by Frances, Hassan and show-stealing baby Mia). All are warmly received, with lots of laughter and - dare I say it? - some less-than-dry eyes in places. It’s a great way to start the evening and whet the audience’s appetite for the awards ceremony to come later on. 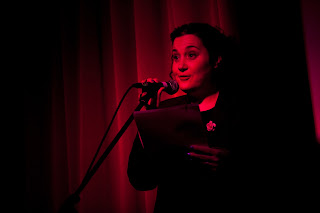 In the second section of the evening, Adam Christopher reads from his new book Seven Wonders. In a comic extract, our (super)hero Tony discusses his superhero name while his girlfriend fits him for his first superhero outfit. Cunningly, Christopher doesn’t reveal Tony’s superpower/s and I feel sure that a number of purchases of Seven Wonders will be made following tonight’s appearance. After the excerpt, Christopher talks to Kate Feld about making up superhero names – and realising some had already been taken. Of particular interest to the Blog North Awards audience, and Manchester Literature Festival more widely, Christopher also talks candidly about the huge impact social media (mainly blogging and Twitter, he tweets @ghostfinder) has had on his career. In fact, finding his agent and publisher through Twitter, he’d be the first to say it has been absolutely crucial. His advice is to use social media to build links within a community, find friends who share your interests, rather than going online specifically to target publishers. Inspired by writers like Stephen King, Grant Morrison, Neil Gaiman and 2011 Arthur C Clarke Award winner Lauren Beukes, Christopher admits he has more ideas already than he will ever have time to form into books.

And so with a drumroll of footstamps (is that possible? It must be, it happened), the winners are announced. As writer of a shortlisted blog, my heart beats a little faster at this point but my category, Best Arts and Culture, is won by A Negative Narrative. Best City and Neighbourhood Blog goes to Liverpool’s Seven Streets, who say what a great time it is for city and neighbourhood blogs, with the – I’m politely paraphrasing – lack of quality in regional news websites. Around the World in 80 Bakes takes the prize in Best Food and Drink Blog (a shortlist full of puns), writer Lauren Prince tells us she’s about halfway through her gastronomical journey, so there’s plenty to come yet. Leeds-based style bible The Magic Square Foundation wins Best Specialist Blog, and Best Young Blogger is a tie between Considerate Trespassing with tales of "going places I shouldn’t", and Every Second Song’s snapshot of university life, culture and travels. Following their readings earlier in the evening, the loudest cheers ring out for Her First Year (Best Personal Blog), and Kevin Boniface (below) winning the Best Writing category with The Most Difficult Thing Ever. 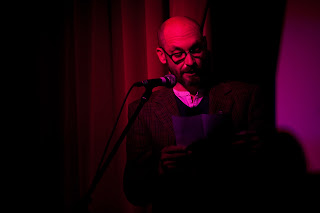 It’s really important to recognise the wealth of writing talent that isn’t in books, so inclusion of the Blog North Awards adds something special to Manchester Literature Festival. It may be that some of the shortlisted blog authors go on to write books, but blogging seems such an important part of many writers’ stories now – including Adam Christopher, and Blog North Award judge Zoe Margolis - that celebrating them and their evidently endless possibilities during a literature festival is entirely fitting.

Laura Maley writes about theatre, art and other cultural things in and around Manchester at Cultural Shenanigans which was shortlisted in the Blog North Awards category, Best Arts and Culture Blog.

You can read more reviews of this event, by students at the Centre for New Writing, on The Manchester Review.
Posted by MLF Blog at 3:14 PM