We’re at the International Anthony Burgess Foundation, inside, a juxtaposition of dark traditional furniture and contemporary exposed brick. The venue feels like a modern theatre or cinema. On the stage is a projector which will no doubt display the English translation for the Polish reading later on. After hearing Norwegian and Dutch narratives at last year’s European Short Stories event, I’m used to this format and excitedly anticipate it.

We’re to expect readings from books Tea at the Midland by Salford-born David Constantine and Cold Sea Stories by Polish writer Pawel Huelle. I listen carefully to Ra Page’s pronunciation of Pawel’s full name. His surname seems to sound like - ‘hwayler’, and Pawel rhymes with ‘travel’.

David begins by reading his story Asylum. Through the image of a girl receiving mental health treatment for self-harm and an eating disorder, the story explores the themes of metaphorical refuge. The girl in the story perceives the institution as a prison rather than asylum. This is a salient point. Consider how refugees may regard a new environment? When arriving at a place of shelter - be it a country, a nursing home, an asylum - is a person being looked after, or are they merely shut inside?

As David continues to read, what strikes me about Asylum is the use of a story within a story. The girl in it writes a fictional story of a Somalian boy wanting to escape a war zone for Swansea. The psychiatrist gives advice for how the Somalian of her story may escape. The story within the story draws our attention to the theme of escape, of wanting to leave a bad place for a good one.

Further into David’s reading, the girl in the story, named Madeline, constantly accuses her friend, a former patient of the institute, of lying about weight loss, among other things, in her letters. Interestingly, as David discusses Asylum, he describes ‘talk’ as often being the accumulation of lies and evasion. Conversely, fiction can get at real truth. Madeline actually repeats “it’s all lies” throughout the narrative. This is perhaps why the psychiatrist in the story persuades Madeline to displace her direct experience in her writing. It’s as though the only way the truth can come out is through fiction. Paradoxically, David goes on to suggest that fiction can offer Utopian possibilities; that is to say, fiction can help us as readers, or writers, to reach a desirable solution and without suppressing what’s really going on for us as human beings. He sums up by saying that while actual exile and refuge is very different from the metaphorical sense, people don’t have to be in a war to feel damaged. 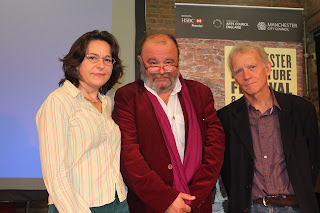 Pawel is introduced with his translator Antonia Lloyd-Jones, a woman he later affectionately describes as the most demanding of all the translators he has worked with. A translator is the closest reader of the text, says Antonia, and must extract from the writer all they can. Antonia’s complimentary reply suggests that, while Pawel makes reference to her ceaseless questioning, he supplies detailed answers that are themselves mini stories worthy of publication. Writer and translator are extremely likeable and natural, and the audience enjoys the banter.

Pawel begins reading Flight into Egypt in Polish. It takes the brain sheer seconds to adjust to the rhythms of the story’s native language, while at the same time, comprehending the story from the projected English version. It’s very different to watching a subtitled film. Film provides a visual image to support the narrative appearing at the bottom of a screen. During this experience, the absence of a visual image is liberating for the imagination.

Pawel’s story was inspired by two evocative images which suggest escape or exile: the first a newspaper photograph of a Chechen refugee; the second, the painting entitled Flight into Egypt, which depicts the baby Jesus being smuggled away from King Herod’s threat.

After reading, Pawel explains that his family, along with three million other Poles, were forced to resettle in another part of their country. This was because the Eastern territories were given away after WWII by Stalin, Roosevelt and Churchill. Other German territories were gained, but this created problems with the Germans for many years after.

The Polish writer shares the moment where he first saw on TV an exploding shell in Sarajevo cause the deaths of many queuing for bread. He realised that despite living in a quiet part of Europe that had happily moved past Communism, the world still harboured dark places.

In 1989, there was an influx of Chechen refugees into Poland. This was a new situation for the Poles, as Pawel explains, because it highlighted that Poland, like any other country, should seek to offer refuge. Previously, people tended to want to leave, not enter, Poland. Even Pawel’s grandfather was obsessed with leaving Poland, and so strongly, that he designed a one-man submarine, but never managed to build it and escape. Pawel believes that we are all refugees on a higher level, because the world is a place of exile in which we all desire some kind of return.

The questions raised by both writers linger in my mind. As I walk out into the dark, crisp night, I wonder, if like everyone else I’m a refugee of a kind, to where or what am I hoping to get back to?

L.J.Spillane has a writing blog at www.ljspillane.com. You can catch her on Twitter at @LJSpillane.

You can read more reviews from this event on The Manchester Review.
Posted by MLF Blog at 5:02 PM