Hiding behind the rather ordinary façade of the Instituto Cervantes in Manchester lies an intellectual Aladdin's cave. Traipsing through the never-ending warren of books and artworks that line the walls, the weary traveller arrives at an unexpected and highly impressive vaulted hall - home of the Instituto's latest show - typographical exhibition, Tipos Latinos - and transformed this Thursday to make room for the gregarious, eccentric figure of Fernando Iwasaki Cauti; Peruvian, historian and wordsmith extraordinaire.

The scene is effectively set for Cauti's mainly Spanish-speaking audience as his fabulous covers - some quite Goya-esque and striking in design - flash up on a screen, creating a powerful image for both hardened fans and the uninitiated alike. Enter Cauti; striding across the room like the circus ringmaster in a scarlet velvet jacket, jet black locks falling like a lion's mane around his head. This man is an artist and cuts a remarkable figure next to his more unassuming companion, Andrew Slater. Professor of Spanish and Latin American Studies at Leeds University, his passion for Cauti's remarkable work has led him to translate portions of his fiction into English for all lucky enough to be present tonight to hear. We are treated to the unique opportunity, not only to listen to the author read an excerpt of his Amor a Primera Vista (She loves you, yeah yeah yeah) in his native Spanish, but to view Andrew's skilful translation on the screen behind. A young boy's narrative on love and understanding the opposite sex, Cauti's work reeks of both rebellion and romanticism; his caricatures spurred along by constant pop culture references (cue Mighty Mouse). Prompted by Andrew, the author explains his interest in the use of humour both as a 'weapon', against authority, and as a 'web' - ie to seduce women. A so far silent and attentive audience begin, unsuccessfully, to stifle laughter as Cauti confesses that, once the futility of trying to make girls laugh dawned on him, he embarked, chameleon-like, on a variety of different characters; the tragedian, the intellectual, the seducer, etc, only to fail miserably and end up exactly where he started.

Through some astute questioning from both Andrew and the now rather eager audience members, we move swiftly onto the hugely hot topics of historical fiction, technology and translation. Cauti proceeds to read a portion of his gruesome historical tale Neguijón; the story of a Golden Age dentist, yanking the teeth from unwitting citizens' mouths to destroy the worm they believed would rot them from within. As Andrew astutely points out, the beautiful cadence of Cauti's Spanish reading, for those who cannot understand, certainly masks the unsavoury subject matter. As the modern reader may naturally romanticise the past, Cauti, as a natural historian, places his emphasis on the dirt, disease and very real terror present in everyday life in 17th-century Spain... and you thought you were too scared to go to the dentist! Placing himself in the camp of 'real books' in the e-reader v paperback debate, when pushed he avoids placing too much emphasis on the format of the novel, preferring to rail against our modern world in the form of historically inaccurate films that detract entirely from reality/real mythology. (This means you, Agamemnon!) 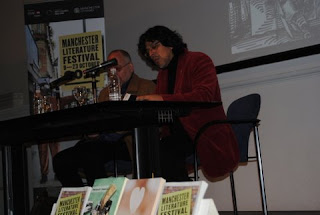 As our audience take to the mikes for their chance to ask the questions that have been bubbling for the past or hour or so, the spotlight briefly falls upon our host Andrew, whose natural chemistry with the author and comfortable interpretation of some of his more complicated thoughts and feelings have proved invaluable up until now. How difficult, these students of Spanish want to know, is the translation of work as nuanced as that of Fernando Cauti? Very, seems to be the answer. For those in the throes of learning this beautiful language themselves, the opportunity to pick the brains of an expert and recognise their misgivings is invaluable. One key factor shines through; no matter what the words, retaining the author's tone and spirit is fundamental.

So - someone asks - what does the future hold for this spirited Peruvian author? More history books? Or does he simply return to the offices of Spanish daily ABC? It is time to go global, Cauti declares. To harness his mixed Japanese/Ecuadorian/Italian/Peruvian heritage for a more universal point of view. In short, to write about the things he misses in his own reading and fill in the gaps and, most crucially, all in his own time...

In a wine-soaked Peruvian haze, we leave our enigmatic author to the crowd wondering what in the world the future holds for his readers. The only certainty is that he simply must finally be fully translated into English for all the world to share...

Lucy is a Manchester based blogger and reviewer at Literary Relish and host of the Manchester Book Club.

Thanks for great information you write it very clean. I am very lucky to get this tips from you

Translation Company
I just wanted to make a statement on the contribution of this blog here. It’s awesome.
It such a best information for the Translation. Thanks to share interesting and informative informations.

I'm very happy that I found your blog. You describe these things in a very interesting way.
Lingy