For the 75th and final event of this year’s excellent festival, Jonathan Harvey is joined at the International Anthony Burgess Foundation by the Manchester Lesbian & Gay Chorus for a brilliant finale. Harvey wrote his first play in 1987, for which he won a £1,000 prize from the Liverpool Playhouse and the National Girobank Young Writer of the Year Award. Since then he has won numerous awards for his plays and television writing, and he is currently part of the Coronation Street team. Perhaps his most famous work, Beautiful Thing, was written in 1993, made into a movie in 1996, and performed last year at Manchester’s Royal Exchange Theatre, a production which included a song performed tonight by the Manchester Lesbian & Gay Chorus, who begin and end the event with three of these songs. Today however, he is talking about his first novel, All She Wants, to which Caitlin Moran responded by saying, "If Harvey is the Scouse Proust, then this is his remembrance of things pissed." 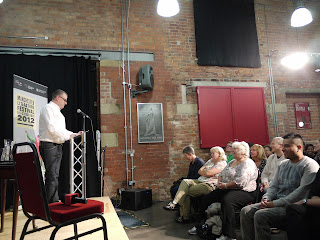 The novel is narrated by an airheaded soap actress called Jodie McGee, which sounds like an ambitious move for a male writer, but one which, judging by his reading, Harvey pulls off very comfortably. He tells us that his second novel, on which he is currently working, also uses a first-person female narrator and that he recently wrote his first sex scene, and had to check with a female friend that it wasn’t "too gay". The chapter he reads to us happens when his protagonist is 17 or 18 and is both silly and hilarious, particularly as Harvey reads his characters’ voices so well. In this section, a friend of Jodie’s, who has recently hooked up with a disabled boy at a party, has become a political-correctness warrior, and even turns up to a pub in a wheelchair herself. After this, Jodie’s parents find out that her "perfect" brother Joey is gay, when he is arrested for gross public indecency. They are horrified to begin with and see him as a freak, until a colleague’s lesbian daughter becomes the talk of her workplace, and Jodie’s mother begins to brag that her son has been gay for years and that she practically encourages it. Harvey delivers the reading with great energy to a highly responsive audience.

He then takes questions, beginning with one regarding his choice to write a novel for the first time after 25 years of writing for stage and TV. He speaks about how he became a playwright and what it’s like to be part of the Coronation Street team, joking that since joining he hasn’t felt so bad about the number of shows he has been fired from. Something that is noted by audience members is the cultural "nowness" of his work, which is full of references to popular culture, and the way all of the characters of his novel can be related to real people.

After two final songs from the L&G Chorus, Festival Coordinator Jon Atkin makes the acknowledgements which close what has truly been an amazing festival.

Michael Smaczylo is a gap year student who has just completed his A-levels at Manchester Grammar School and hopes to study English Language and Literature at university next year. He Tweets as @mashsmaczylo.
Posted by MLF Blog at 2:38 PM