Drinking in the culture

It is that most rare and precious of times in our fair city: a warm and sunlit evening. I feel free to use the word dappled, regarding sunlight through leaves. The Midland Hotel, our grand dame, greets the sun as prodigal, its russet stone glows. But enough of all that - me and about 500 people (38) are here for a tour. It is a sold out MLF event, and the crowd includes even more chancers, hoping for cancellations.

Ed Glinert is our guide. From extensive research, I know that he started City Life, our city’s sadly demised magazine, so he has a tick in the Manchester-knowledge box. We are led to the back of the Midland, me suddenly realising that standing/walking and writing is quite tricky. Ed outlines the walk: “We have a few stories, we go to a pub, we have a drink.” Nice. Apparently each pub will have “some kind of tenuous literary theme”.  Just how tenuous?

We turn our attention to the Midland, and to Anthony Burgess receiving the Portico Prize here in 1989, again all fine Manchester institutions. The prize money of £1,500 was apparently an insult to Burgess. We move swiftly on, across the road, Manchester Central, and the Peterloo Massacre, 16th August 1819, where 70,000 protesters gathered from the 100 cotton mills within 10 minutes of this spot, to demand parliamentary representation. There was “no disturbance until the authorities intervened”, killing 18 and injuring 700. The Mask of Anarchy is devoted to the massacre, and was suppressed by the publisher until those involved had died. As trams rattle past, it is strangely atmospheric here, with Shelley for company.

We turn from an exhibition centre to another hotel, the Radisson, “built out of the shell of the Free Trade Hall”. Glinert reads Howard Jacobson’s rich description of the hall’s musical performances, which made Manchester “once rival to Berlin and Vienna”, then we move on to the Bridgewater Hall (below), where he reads again from Jacobson: “the location has no soul… you are not sitting where great orators and agitators once sat”, referring to the erstwhile Free Trade Hall again. 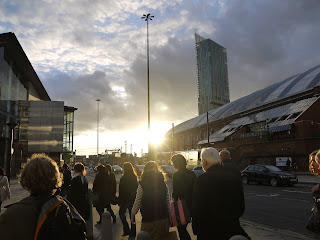 Next, we have a great literary daughter to discuss. Standing on (nearly in, at a few points) the Manchester and Salford Junction Canal, next to a beautiful old mill, the atmosphere is recaptured with some Elizabeth Gaskell, always good for a tale of grimy working life. And Mary Barton is fairly grimy, as Glinert reads descriptions of the working people pouring from smoke-soaked mills. Gaskell so shocked the sensibilities of the middle classes that she wrote anonymously, and, when found out, had to hide in London. So, in North and South, Manchester is called Milton. Cunning.

Next, the pub. As the group is so huge, it strangely splits in two, for a trip to the beautiful but tiny Peveril of the Peak, and the externally lovely, but internally generic, Rain Bar. With only my notepad for company, I feel a bit of a loner at this point. Half a bitter and some McCoys are good fare, but the tour seems slow to start again. Momentum seems a little lost. We gather at the Pev, for tales of Walter Scott’s longest novel, Peveril of the Peak, not about this pub, but about the fastest stagecoach from Manchester to London: 11 hours. And Rain Bar? “No literary connection at all.”

Down to the canal again - underneath our city’s streets lie these labyrinthine waterways, evocative of Gaskell’s Manchester. We stop in an alleyway behind the Ritz to read some John Copper Clarke – Salomey Maloney. I love this one, read as the cries of ambulances float on the streets above us. Back on Oxford Road, and the serenity of the canals is broken. I smell McDonald's, I see United fans. We pause at the Central Library, cloaked in scaffolding, before moving to Albert Square and the council’s plans to cover Library Walk, which surely all of Manchester feels is wrong.

From here we go to Bootle Street Police Station, where Jimi Hendix was searched for drugs in 1966, George Orwell came to get a solicitor to help him cash a cheque on his way to Wigan Pier and Brendan Behan was brought when entering England after a ban; accusations of terrorism. My favourite part of this section is a passerby, possibly tired and emotional, shouting: “What are you all protesting about?” This would have to be the most polite protest in history, but it evokes the Manchester spirit!

To the second pub, The Ralph Abercrombie, the only surviving building from the Peterloo Massacre in the city centre, though you’d never know it from the inside. Again half the people are shipped off to the The Nags Head, and we lose a few to the night. When we reconvene in a dark car park, we quickly visit the John Rylands Library then the grave of the de Quincey family outside St Ann’s Church. We end with Thomas de Quincey’s wonderfully named Confessions of an English Opium Eater (who knew the Window Cleaner films had such a literary forerunner), and Anthony Burgess’s claim that he was the descendant of Bonnie Prince Charlie. Possibly after a few in Tom’s Chop House.

It’s been an interesting tour, possibly slightly disjointed, which was partly due to the numbers of literary boozehounds! I stalk off into the night, full of ale and crisps, and opium.

Jennie Shorley Carling has degrees in Classics and Ancient History, and works for MMU Business School. She is currently undertaking a PhD and likes writing words and making things. She Tweets @JSho_CfE.
Posted by MLF Blog at 3:18 PM