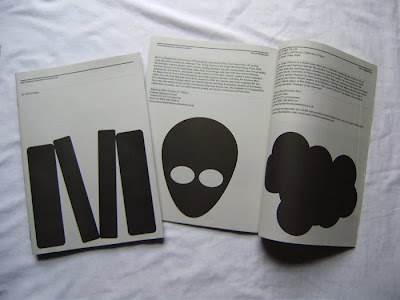 The 64 page brochure was printed on recycled newspaper – making it very environmentally friendly and economically viable, enabling us to dedicate full page attention to every event in this year’s festival. One of our guest authors, Joan Bakewell, loved the concept so much she wanted to recommend all arts organisations follow our lead. Not everyone loved the funky design as much as we did, but out and about at festival events, audiences were certainly engaging in animated discussions about the brochure and the intriguing logos gracing volunteer T-shirts, posters and banners. “Did you go to the Long Division?” was one of my favourite, overheard snippets of conversation.

This is the third year that MLF has worked with Mark Studio, and each time they’ve produced stand-out art work, helping to raise awareness of the festival within the wider zeitgeist. The 2008 new branding was featured in Design Week, and selected for inclusion in the Creative Review 2009 Annual and the industry bible, Design and Art Direction Annual 2009. The 2007 MLF brochure, which you may remember, featured photographs of people having sneaky reads in corners of the rain-washed city, was selected for inclusion in the Big Book of Brochures published by HarperCollins. We can’t wait to see what imaginative new concept they’ll come up with next year!

Manchester Literature Festival is apparently not the only book festival in town – our festival blogger Clare Conlon picks her highlights at this month's Chorlton Book Festival...

Less than a week after Guo Yue and Clare Farrow wrapped up the Manchester Literature Festival with their magical Children’s Bookshow bookend, the city isn’t ready to close its dustcovers just yet. Even The Guardian has picked up on the bookish buzz of the place with an article about Manchester’s Literary Renaissance by Manchester University lecturer and MLF trustee Jerome de Groot, which the city’s literati and Twitterati have been proudly disseminating (see The Manchizzle and The Art of Fiction blogs for starters). In it, Manchester is described as ‘one of Europe’s most creative and dynamic cities’, so it’s no surprise that even the sleepy suburbs are a hotbed of talent.

Yesterday, down in the south of the city, the fifth annual Chorlton Book Festival got off to a flying start with the local launch of Too Many Magpies, the new novel by Didsbury-based author Elizabeth Baines. When she’s not a prizewinning prose fiction and script writer, Baines likes to tread the boards, so she had her 20-strong audience hooked as she treated them to two excerpts from the haunting story set in an imperfect future heavily influenced by the local area. An acclaimed short story writer, she also read from one of her more light-hearted pieces – the tale of a writer getting a script mentored, it was well received by those gathered (many of whom were writers themselves) in the relaxing environs of Chorlton’s Lounge bar.

Baines’s fellow Salt author Robert Graham will be appearing at the Festival later in the week, reading from his latest collection of short stories, The Only Living Boy, in the cosy Lloyds Hotel. Heartwarming and quirky, Graham’s work draws inspiration from the people and places of Manchester, and one of the anthology’s stories, Fruit Or Vegetable, revisits the principal characters of his novel Holy Joe, which is largely set in Chorlton, where he lives. Graham also teaches at MMU Cheshire and is the author of a number of creative writing guides, including How To Write Fiction (And Think About It), and his workshops and readings are always well attended.

Not surprisingly, the lovely old Chorlton Library building is playing a big part in the festival, hosting a number of events over the 13 days (click here for the full programme). It will provide the backdrop next Tuesday as Manchester-based crime writer Bill Rogers reads from his thriller The Cleansing, which follows a killer clown who is haunting the city’s streets. Rogers may also have a few real-life local horror stories to reveal – having worked as a schools inspector in the Chorlton area, who knows what tales he has to tell!

As well as novelists, short story writers, poets, playwrights, historians and non-fiction authors, Chorlton Book Festival will this year include bloggers, so even the most modern forms of writing are explored. Didsbury-based writer and blogger Adrian Slatcher works for the Manchester Digital Development Agency, advising arts organisations on how best to use social media to improve their online presence. As part of the festival, he will be presenting a workshop on social media for writers, showing how the web can be exploited for writing, marketing and publishing purposes.

Also bringing the festival bang up to date is a poetry slam, compered by street poet and MLF's own Call Busker Mike Garry, whose latest work includes Mancunian Meander and features the unforgettable verse: Gorton girls / Know all the words / To songs by Chaka Khan. The best performance will win £50 and the contest (one of a number of events aimed at young people) is open to anyone aged 13 to 19. 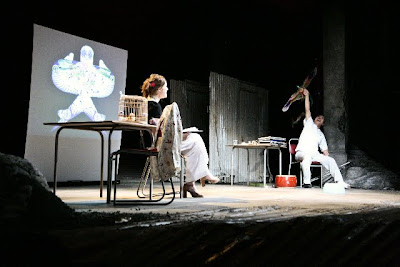 For the very final event of this year’s Manchester Literature Festival, we take over the Library Theatre for a double showing of the Children’s Bookshow, featuring the internationally acclaimed flautist Gue Yue and his writer wife Clare Farrow. Over the next hour the husband and wife team bring to life their collaboratively written book Little Leap Forward, which tells the story of Yue’s own childhood in Beijing during the Cultural Revolution.

Yue and Clare are positioned amongst corrugated metal sheets, the stark set for the theatre’s current production of The Good Soul of Szechuan, which conveniently helps conjure the narrow maze of alleys – hutongs – of 60’s Beijing. Yue’s leg is in plaster due to a recent footballing injury (he says he still feels like the eight year old Little Leap Forward inside, and he certainly has the exuberance of youth both on and off stage). Behind them there’s a screen showing old photos, interspersed with some of Helen Cann’s beautiful illustrations.

Clare reads poetic passages from the book and Yue elaborates on the story with fascinating details of his childhood, explaining how being very poor did not stop him and his enterprising friends from having fun: inventing games using apricot stones and making kites with their mothers’ message paper. I’m starting to reminisce about my Blue Peter days now, but I’m sensing a certain amount of panic from the younger members of the audience – is someone about to confiscate my Nintendo?

From an early age Yue wanted to be a musician and begged his mother for a violin, a cello, and finally, a more affordable bamboo flute; threatening to lie down in the deep snow until she relented. He now has a case full of flutes of varying sizes, some with jade tips, which he plays entrancingly, but it’s a tune on his first penny flute which gets the biggest cheer from the kids.

At one point Yue demonstrates how to catch a bird using a chopstick, a bowl, a piece of string and a very fast reaction. In the story, Little Leap Forward keeps his wild songbird, Little Cloud, in a small cage (a common practice in China until very recently) but despite his best efforts he can’t get it to sing to him. His friend Little Little, now living under the frightening new order imposed by Mao’s Red Guards, has a great empathy with the bird and asks, ‘Wouldn’t you rather be free, just for a day, than spend a lifetime in a cage?’ No prizes for guessing what happens next.

By the end of the session the theatre full of children and their handful of teachers are feeling entertained and educated in equal measure.
__
Cathy Bolton, Festival Director
Posted by MLF Blog at 10:41 AM No comments: