Being a newcomer to the Manchester Literature Festival blog, I wasn’t supposed to be covering tonight’s event. I’m not even here as a volunteer. I came to see the man who, earlier in the festival, I had heard somebody describe as ‘the closest thing we poets have to a celebrity’. Simon Armitage, who has published 10 poetry collections and has been awarded a CBE and the Lannan Literary Award for Poetry, was one of the first poets I properly studied at school, occupying a whole section to himself in the AQA GCSE poetry anthology. It was around this time that I began to realise that English Literature was the subject I wished to continue with at university, so I feel somewhat indebted to Mr Armitage for inspiring me to make that decision. For this reason, I was extremely excited to find out on arrival that the blogger had been unable to make it and I had the opportunity to write the post instead!

Armitage begins by expressing his relief at the level of attendance at the Anthony Burgess Foundation, due to his concerns about clashing with the England vs Poland World Cup qualifier and, ‘more worryingly’, The Great British Bake-off final. This sets the tone for the evening and his warm Northern humour makes it a really enjoyable event. Reading from his new book, Walking Home, Armitage recounts his trek along the 256 miles of the Pennine Way. Growing up in Marsden, he remembers backpackers ending the first leg of the walk from Edale and looking for food and accommodation in the village. He noticed at the time how warmly the visitors were welcomed. It was only a matter of time before he too felt obliged to undertake the walk. However, being a self-confessed contrarian, Armitage decided to walk in the opposite direction, into the weather, and towards home. Deciding to test the relevance of his art, he stopped each night along the way, like a modern-day troubadour, to deliver a poetry reading at pubs, schools, village halls and even a Georgian theatre, taking a sock for collections of ‘whatever you think it’s worth’. This resulted in turnovers of dental appointment cards, a playing card (‘joker’) and a telephone number (‘Call me, Brenda’), along with the money. 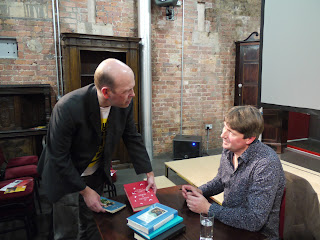 He begins by reading from the book’s wittily titled Preamble, telling us about the reactions of his family to his plans. Amid worries about giving off the appearance of a mid-life crisis - ‘why not just get a Harley Davidson and have done?’ - Armitage predicted his chances of completing the expedition were 50/50. This received the response, ‘I admire your optimism’, from his wife, while his father told him not to bother with a raincoat, but to instead use a bin-bag with a head-hole. After showing a slideshow with pictures of a Mars Bar, the birthplaces of Ted Hughes and the Brontës, and ‘a guy who looked like Bob Dylan on a quad-bike’, he reads extracts about an early-morning poetry reading and his feelings of existential melancholy in the fog up Cross Fell, and tells us about an accidental voice memo, which recorded 40 minutes of curses and enquiries of a more philosophical nature.

Answering questions from the audience, he diplomatically avoids the question of whether there is a difference in character between people in Yorkshire and Lancashire, and, after being asked about the transition between poetry and prose, muses on Margaret Atwood’s assertion that prose and poetry come from different parts of the brain. While he agreed with the sentiment in a metaphorical sense, I couldn’t help noticing that his prose is far from prosaic, and in the context of a reading, could quite easily be mistaken for poetry. Armitage ended the questions on the heart-warming note that while he expected to write a book about himself, it ended up being about the help and encouragement of others, before reading a new poem about the experience, called Yellow Rattle (Poverty).

Michael Smaczylo is a gap year student who has just completed his A-levels at Manchester Grammar School and hopes to study English Language and Literature at university next year. He Tweets as @mashsmaczylo.
Posted by MLF Blog at 2:43 PM

Great stuff Michael. Excellent writing to summarise an excellent event. Shame about the photo, I should have brought my wig. Andrew