There was no competition for me when choosing an event to report on. I had always loved CBeebies Bed Time Stories as a youngster, and thought this would be a fun way to "time travel" to my childhood. Although the CBeebies Story Telling Event was a daytime event (I was used to Bedtime Stories) and presenters Cerrie Burnell and Alex Winters were not the same familiar faces I remember from the noughties, the event captured the magic of storytelling, and allowed me to enjoy it as if I were young once more - despite the fact I was three times the size of most youngsters there!

My younger sister, Rosalind, who is seven, watches Cerrie and Alex on CBeebies now, so I imagine she must look up to them the way I did to former presenters Pui Fan Lee and Chris Jarvis. She would have loved this event, as I’m sure did all the families that attended. What struck me most was the interaction between Alex, Cerrie and the children. Even before the event had begun the presenters were more than happy to have their photographs taken with their eager young fans, giving hugs and high fives and posing enthusiastically when a child decided they would rather take the photo than be in it. There was a warm, friendly buzz, and I felt instantly welcome and comfortable.

Cerrie and Alex chatted to the many toddlers and young children surrounding them as they took their place on stage. Cerrie asked how they had travelled to the event, and laughed as some of the children said rather unusual modes of transport such as submarines and camels! Cerrie then said they had travelled from the CBeebies House by bus, which led to an impromptu (and energetic) rendition of The Wheels on the Bus from the entire audience. Again, the interaction between the presenters and the children was a joy to watch.

The first book read was the instantly recognisable classic We’re Going on a Bear Hunt by Michael Rosen. As Cerrie read through the various obstacles, it was as though the audience were in the story itself, squealing with excitement, and repeating the famous lines "We can’t go under it, we can’t go over it... WE’LL HAVE TO GO THROUGH IT!" Parents participated just as enthusiastically - this was definitely one for all the family. This book was read to me as a child and it was nice to relive it again through the ears of toddlers. 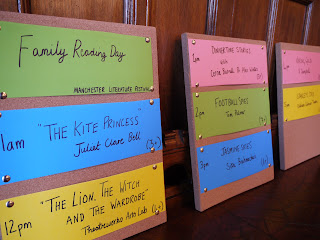 The next book read was The Tiger Who Came to Tea by Judith Kerr. Alex told us this was his favourite childhood book, which was reflected in the enthusiasm with which he read it. This made me think of my favourite books as a child, including Guess How Much I Love You by Sam McBratney and Gus and Nipper by Rodney Peppé. I thought it would be great to read them to a younger audience, and relive the stories through their eyes as Alex did as he pretended to be the rather posh tiger, and acted out the mischievous occurrences he got up to. He interacted with the children, asking them if they liked the various foods the tiger was necking, and if anyone in the audience had had a tiger over for tea to which a small boy innocently replied: "No, but a hedgehog came once!"

The other books read were Pushka by Stephen Mackey and How to Catch a Star by Oliver Jeffers. The latter was my favourite, as the children acted out every part of the story together, such as attempting to fish the star out of the sea and climbing a very high tree to reach for the star, at which point everyone’s favourite S-Club 7 hit sprung to mind! The children then became the boy travelling in his dad’s rocket to catch the star, anticipating the countdown from 5,4,3,2,1...BLAST OFF! The children screamed with excitement; it was fantastic to watch. The presenters asked the youngsters if any of their dads owned a rocket, to which the same boy who had supposedly had a hedgehog round for tea replied "No...But my dad’s an ALIEN!" Everyone was in hysterics. Cerrie then asked the boy if his dad was here today and he replied, "No, he’s in SPACE!", as if it were the most obvious thing in the world!

When the event came to a close, everyone applauded the storytellers, who in my opinion had done an amazing job of engaging a room full of toddlers for an hour! I get fed up after 10 minutes with my younger brother and sister! The event was a huge success and it was great to see the presenters were as nice in person as they appear to be on TV. You could tell they really enjoyed themselves and genuinely wanted to be there too. Everything was really well organised, the staging looked great and the informal atmosphere meant adults could relax and just let the children have the best time possible! I loved listening to the four stories, and I learnt no matter how old you are that no TV programme, film or novel compares to the magic of being read a children’s book, especially when the characters are as loveable as The Tiger Who Came to Tea!

Throughout the Festival in 2012 we have been working with a group of young people to support them to become digital reporters, and to document a range of events from their perspective. As well as writing blogs and reviews, the young digital reporters have responded to our events using other methods such as photography, illustration and radio.
Posted by MLF Blog at 3:51 PM

The importance of writing a good resume will always be a big matter for job seekers, even in the military sector. Turning to a professional assistance is your best choice. Look for best resume service online here.