Words and photograph by Sarah-Clare Conlon.

The 8x8 magazine project is a really interesting collaboration, which brings together eight writers and eight illustrators, all students. The authors are second and third years at MMU Cheshire, who submit their fiction coursework for consideration; the artists are from the second year of ’s 3D illustration degree, selected via a competition.

This is the fourth year the book has been put together, in this instance by Sarah Galloway, who is thanked by MMU tutor Robert Graham, with a cover design by Holly McLoughlin, thanked by ’s Jo Spicer. Robert and Jo take it in turns to introduce the contributors to the stage to answer questions about the creative and collaborative processes, and to read their stories in the case of the writers, or, in the case of the artists, to discuss their pieces, some of the workings-outs and roughs shown on screen behind them. 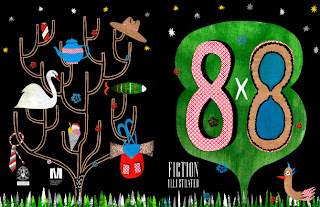 Up first is Tim Rands, whose story Long Time No See deals with Danny’s relationship with his parents, and is illustrated by Andrew Melville. Jamie Lawton reads from Ladies, then the illustrator Rachel Felstead describes how she worked with Jamie Walsh’s words (One For All), but was actually pipped to the post by fellow illustrator Cat Webb. The competition is strong! We listen to a reading by James Harker, who, not only is an Edge Hill Crime Writing Competition winner, he is also Writer On Attachment at the Everyman Theatre in . Another genre writer is Dan Peacock, with the sci-fi offering Entropy, and we also hear about the partnership by Jessica Redmond (author) and Emily Dennison (illustrator). 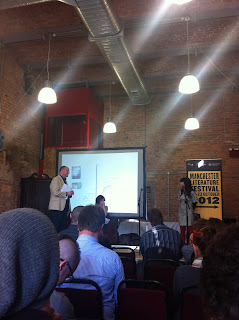 Jo Spicer explains how it’s “Great for the students to have a printed piece in their portfolio”, and we see the finished publication, with its glossy, bright cover. Jo asked Jadine Butler about how she set about the task of designing something to go with Laura Brown’s As It Was, and she explained how she “tried to pick the two most symbolic moments in the text”, which includes a half-eaten piece of toast, which, indeed is very representative. Robert says of Laura: “She’s very good at leaving it entirely to the reader to work it out, using the little tiny things to say a lot more.”

Finally, we have some flash fiction, from Louise M North (pictured). Her seven stories are called the Wings Collection, and each deals with a running theme, but using very different forms. She attributes her experimental approach to writer Richard Brautigan, and thanks her partner illustrator for really getting to grips with her pieces.


Sarah-Clare Conlon is a freelance writer, editor and press officer. Her award-winning blog, Words & Fixtures, is about language, literature, arts and culture.
Posted by MLF Blog at 1:06 PM

Thanks for recording the event so well, Clare. I'll post this on our student network, so they all see it. Hope you get a good rest once the MLF ends.

This is a nice read, it was a good event! :) Some really sweet work from both illustrators & writers.