It was only an idea

Words and photograph by Nija Dalal.

Last Wednesday, I wandered down to the International Anthony Burgess Foundation for an event titled From St Petersburg To Manchester. How apt, I thought, thinking of the Russian-inspired futuristic language of Burgess's young droogs. I picked up a free badge, featuring an illustration of Alex, and thought about mailing it to my high-school Lit teacher. I wondered where she was and how I could get in touch with her. Luckily, the event started before I got too lost in dreams of the past.

The event, I presumed (having not properly read the blurb), would feature a Russian author and a British author, both with experience writing about St Petersburg. I was wrong.

But I wasn't disappointed.

The event actually featured Heather Reyes, the editor of City-Pick Travel Guides, and Edward Docx, award-winning novelist and author of Self-Help/Pravda, based in St Petersburg. The IABF's hall is narrow, but airy, with high ceilings, big windows and brick walls. Antique furniture lines one wall and the room is focused around a a simple, utilitarian stage. Sitting in the second row, I noticed the seats were placed so close together, I was feeling a little claustrophobic. I took an aisle seat and scooched my chair a few inches over to get some space.

City-Pick Guides are city-based travel guides that include excerpts from literature about the city in question. Thus far, Oxygen Books has published guides on New York, London, Paris and many others, including St Petersburg.

Heather and the moderator kicked off the evening with quotes about St Petersburg from Tolstoy, Nabokov, Dostoyevsky and other illustrious names, creating a contradictory literary portrait of the city. 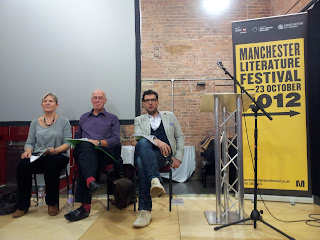 Then Edward Docx started reading some short excerpts from his novel Self-Help. Midway, he realised we'd need a short history lesson on St Petersburg before his story made sense. Peter the Great, in the 1700s, needed a port, he told us. So he captured the territory from the Swedes, built a fortress, brutally conscripted peasants to build the city, and then decided to make it the new capital of Russia, thereby forcing his entire court to move there, too. St Petersburg is outstanding, Docx told us, because it is that rare thing: a city that began as an idea. Not by convenience, or accident. Not by trade. Just an idea and sheer vicious force of will.

Reyes discussed the process of editing a travel guide, and they took questions from the audience. I was impressed by the number of Russophiles clearly present in the audience, as a discussion about the merits of Moscow vs St Petersburg started with the first question!

Docx described St Petersburg as a city of facades and, behind them, courtyards, linked alleyways, outward beauty hiding secrets within. Between the quotes from City-Pick's anthology and Docx, I found myself adding Petersburg to my list of places to be, one day.

And the evening ended with a strangely delightful treat! Docx's publisher, Picador, is celebrating its 40th anniversary, and Docx summarised some of his favourite novels in exactly 40 words. It was a fun bit, as Docx performed each story with a relevant accent - The Great Gatsby in an American accent, for example. I can't judge all of the accents he did, but the American accent was fairly good. A light-hearted way to end a fun and thoughtful, wanderlusty event.

Nija Dalal is a writer, radio producer, and a second-generation Indian-American. She's radio obsessive, cooks and crafts and sews, and keeps a blog about it when she remembers. Currently in Manchester, she's lived in Sydney and Atlanta, and she's looking for a job in radio. You can follow her on Twitter @nijabird.
Posted by MLF Blog at 12:42 PM