Words and photograph by David Hartley.


A small but attentive crowd gathered at the International Anthony Burgess Foundation for a late Sunday afternoon reading by two of Comma’s regular anthology contributors, Guy Ware and Adam Marek. Both men had new merchandise to peddle in the shape of Ware’s You Have 24 Hours to Love Us (which is available electronically now, and in print very soon) and Marek’s The Stone Thrower, both of which snug nicely into the ever-burgeoning Comma canon. The backdrop of the converted mill, with its Burgess-adorned walls and shelves, lent itself perfectly to the tales presented by Ware and Marek, treading as they both did along the precarious threshold of realism and fantasy, a realm where Burgess himself was often to be found.

Recovering civil servant Guy Ware stepped up for the first reading, presenting his story In Plain Sight, from which the title of his collection is taken. It's a curious and gripping spy story which seemed to develop sideways from wherever you might have expected it to go. Stan is a shunned spy, living out a sleeper existence atop a mountain among a quiet idyll of chickens and watercress, but the governments he is bound to will not accept that he might not love them and he has 24 hours to confirm it either way. Ware expertly weaves in the absurdity of darkly humorous psychological warfare, while pulling the audience through the pain of Stan’s tricky love life. It triggered more than a few ripples of laughter in the room as well as some uncomfortable squirms from Ware’s own offspring sitting on the front row. But if this story is anything to go by, go buy the whole collection, dear reader, because it won’t disappoint. 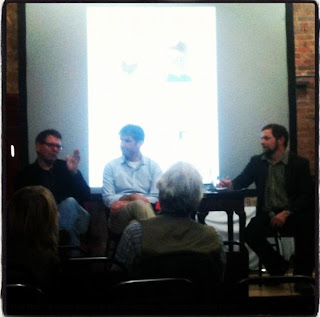 Adam Marek took over the spotlight to read from his latest collection, and picked a short story that was able to promote not one anthology, but two; a marketing simultaneity that must have pleased the powers-that-be at Comma. Entitled An Industrial Evolution, the story is featured in The Stone Thrower but also in Comma’s latest science-meets-fiction anthology Bio-Punk, the launch of which took place at this very festival earlier in the week. Marek’s brief here was to write a story based on a real and current development in the field of biotechnology, focusing particularly on the ethical dilemma such advances might present, should they come to fruition. Marek met with Professor Bruce Whitelow from The Rosalin Institute at the University of Edinburgh and travelled to the murky outer-edge of current concepts in cloning technology, which, apparently in a very real sense, could lead to trans-species fertilisation. Which is my own cod-science and probably incorrect way of saying: one animal giving birth to a completely different animal. And while we all started picturing mice-elephants and cat-dogs, Marek launched into his own interpretation of the science, which was all the more measured and profound.

The story took us a short punt into the future and then deep into the dark heart of the Sumatran jungle to encounter Orangutans saved from the brink of extinction by these posited advancements in cloning. And yet it soon becomes apparent that the majestic great apes are not quite what they once were; the first one encountered in the story is wearing denim shorts and proceeds to fist-bump one of the main characters. But things take a more melancholic turn later as Marek weaves in his research of the plantations of Sumatra, and we find the science and the apes rendered in a more discomforting and disquieting scene. One can’t help images of Planet of the Apes and its myriad prequels and sequels floating in after reflection, but Marek is an expert at handling his material at the correct distance and leaving us with painfully real thoughts, over and above fanciful fantasies. So while not exactly a soaring endorsement of the science explored, the story served its purpose as marketing for its host anthology, and I promptly parted with my cash for a copy.

The Q&A post-readings was a delightful affair, with both writers answering the interrogations with good cheer and further anecdote, while the obligatory influences question brought creatives as far ranging as Jose Saramago, Karen Russell and Spike Jonze into the fold. Both Ware and Marek found a symbiosis in the acknowledgement that their writing attempts to mix the real and the fantastic in a happy blend – Marek using the analogy of the demarcation created by oil on water, both elements then emulsified together to make mayonnaise. A nice image, but both writers demonstrated their works and themselves to be far more than mere condiments, and we can all look forward to what will be served up next.

David Hartley is a blogger and short story writer based in Manchester. He blogs at abarrelroll.blogspot.com and will be publishing his first collection of flash fictions with Gumbo Press later this year. Find him at twitter.com/lonlonranch

You can read more reviews of these events, by students at the Centre for New Writing, on The Manchester Review.
Posted by MLF Blog at 3:46 PM