Imagine, if you will, that some genius in his secret basement lab decided to mix the creative genius of China Miéville with the stage-craft of Eddie Izzard. The result would be something very much like Alex Scarrow. His mission today is to entertain that group of people most difficult to impress: children and teenagers. They look to each other, deciding whether they think this is cool or not. In front of them, a bald man with a goatee beard is leaping across the stage while a projector flashes images illustrating themes from his book. He is here to introduce a group of schoolchildren of various ages to his series of books, titled TimeRiders.

Alex knows his audience. He knows not to try too hard to impress, but to be lively enough to engage and entertain. He tells us about his past, first of all. I’m riven with envy to find out he worked designing and developing games for a living. He knows the kids’ world, the games they play, the TV they watch and the books they read. Before long, he’s broken through their reticence. A few of them poke their hands up when he asks if they’ve been to New York. More hands go up when he asks if they’ve played Call of Duty. He projects familiar and unfamiliar pictures on to a screen to help describe his books and explain the world of the TimeRiders, and he plays a trailer for the series, which you can watch below. 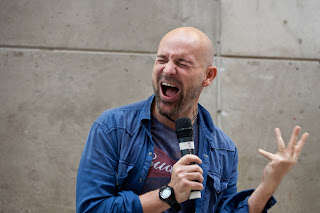 Pacing down the aisle, he exclaims, “I saw somebody yawn! It was … you!” Swivelling on one foot, he points to a girl. She handles it with aplomb, and tells him her name, Hannah. Alex uses Hannah as an example to explain how time is corrupted and changed by the enemies of the TimeRiders. We’re asked to imagine Hannah going back in time to speak to Hitler. He impersonates Hitler, and comes out with a German Yoda. “Invade Russia, we will!” The whole crowd collapses in fits of giggles and I’m in pain from laughing so hard. By now he has the audience eating out of the palm of his hand. The TimeRiders must prevent Hannah and our example bad guy changing history so that Hitler wins World War II and plunges the world into chaos. He segues neatly into the wildest, liveliest reading of a book I’ve seen in a long time. He bounds across the stage, back and forth, adding words and whole sentences, playing out each part. Every child in the room pins their attention to him, spellbound. He whips through the first three chapters of the book in a whirlwind, barely reading from the text at all.

Without pausing for breath, Alex launches into a Q&A. Everyone is keen, and their questions are good. Some have both hands up, bouncing up and down in their seats to get his attention. Somebody asks the all-important question about the grandfather paradox, but to answer it would give away spoilers. We’ll have to read the books if we want to know more. He never once patronises his audience, treating the youngest and oldest members as equally intelligent and capable of understanding his train of thought. By the end, the last vestiges of that adult-child barrier have been broken down and Alex is swamped by people wanting to have their books signed. 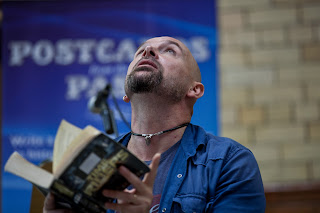 Alex is that rare thing: a writer possessed of equal ability with the pen and on stage. His books are just as lively, engaging and interesting as his performances. His use of multimedia to give us visual cues is well balanced, so we’re not overwhelmed, but we have something to work with. Perhaps most importantly, he knows how to talk to his audience, to bring them into his world and excite them without being condescending. Book events are often all about the book; the author’s appearance tacked on as an afterthought, but Alex is comfortable front and centre, putting on a show. It makes for a great afternoon.

Joely Black is a writer, author and gamer living in Manchester. She has published three fantasy fiction books and is currently working on a post-apocalyptic novel with the author Daren King. She blogs about gaming, fantasy, sci-fi and books at www.joelyblack.com and on Twitter as @TheCharmQuark.
Posted by MLF Blog at 2:35 PM