At last year’s Manchester Literature Festival, I had the chance to review the Manchester Camerata event A Portrait of Words and Music. I was so blown away by the quality of the music, and the richness of the experience, that when I saw the RCNM was putting on another mingling of words and music, I signed up immediately. I was not disappointed.

We are back in the College’s concert hall to see a discussion between Sarah Quigley, author, Clark Rundell, a musicologist, and composer David Horne. Sarah’s new book, The Conductor, fictionalises the creation and first performance of Shostakovich’s Seventh Symphony. It was a dark and bitter time in Russian history, unfolding during the siege of Leningrad from 1941. The book details the tense and complex relationship between Karl Eliasberg, the conductor, and his orchestra, as they struggle to survive and produce music in a city holding on by the barest of threads.

Sarah opens with a reading from the book. There are some minor sound issues, giving the impression, as she speaks, that she’s being mimicked by a series of small bells. The story is so good, however, that after a moment, I’ve forgotten about the tinkling echo. She reads first from the prologue, introducing us to Karl Eliasberg. He is a man struggling with being always second best, and never quite measuring up. In a later passage, Sarah details the first moments of Shostakovich’s inspiration beautifully, while also conveying the way war tears apart relationships and lives. 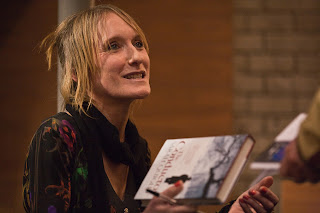 This is one of those events when we see how creators of different types often work in similar ways. In the discussion that follows the reading, Clark and David both enlighten the audience to the world of creating and studying music. There are so many similarities between their work and Sarah’s that it is a delightful meeting of minds. The conversation covers the difficulty of conveying real-life historical figures in a fictional context, and Clark reassures the audience that Sarah has done an excellent job of painting a fictional picture of the life of Shostakovich between the moments for which we have details.

David is able to shed light on the work of a composer, and how effectively Sarah has evoked the creative fire that takes over any artist. Sarah herself remarks that conductors, actors and actresses, musicians and dancers are all just as important as the composer, and the writer. “To bring art to an audience is as important as to create it.”

The trio move on to a discussion of the creative process itself, and it seems the processes of writer and composer are very similar. It’s only during the later performance I realise that perhaps it’s because they’re essentially doing the same thing, via a different medium. This is about sharing or conveying a mood, a story, actions, what is witnessed or felt, to the audience or reader. Music had always felt shrouded in mystery to me, the composer’s art something quite different to writing. In fact, perhaps it is more similar than I could possibly imagine. They use notes rather than words. 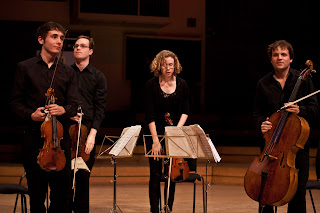 The discussion breaks off for a performance by the Torelli String Quartet of Shostakovich’s Eighth String Quartet. Just as last year, the music carries me off completely. Shostakovich dedicated the piece to the victims of fascism and war, and it brings to mind the pain and sorrow that must have hung over the city of Leningrad during the siege. I can suddenly imagine him looking out of a window, seeing people struggling down the street during one of the worst winters in Russian history, the sudden whistle and rumble of bombs, fading out into the grief of suffering. So much pain, fear and struggle is conveyed in a very short time by four young musicians with great talent.

The event ends with a book signing. Sarah is a lively and engaging author, pausing to chat with everybody queuing to get their books signed. Once again, the blend of music and words has worked magic.


Joely Black is a writer, author and gamer living in Manchester. She has published three fantasy fiction books and is currently working on a post-apocalyptic novel with the author Daren King. She blogs about gaming, fantasy, sci-fi and books at www.joelyblack.com and on Twitter as @TheCharmQuark.
Posted by MLF Blog at 2:57 PM