Variation on a theme

Less than a week after the National Poetry Day celebrations, I find myself back in the poetry section of Waterstones Deansgate; back with the gang behind Carcanet Press. They're a busy bunch at the minute - I recognise one of the poets reading today from yet another recent Carcanet event, that time at the Burgess Foundation.

Evan Jones, in fact, is the first up today, and I'm relieved to hear him read something different to the last time I saw him; not because I didn't like his other stuff, rather because it's nice to have a change. He is reading from his Paralogues collection again, though - "paralogues" being the Greek word for "ballads", and these ballads being inspired by Greek mythology. He hails from Toronto, but admits: "I might be Canadian, I might be Greek - depending on my mood." In a soft accent, he presents "sections or selections" of a long poem, a modern-day, and often humorous retelling of Byzantine folk ballad Constantine and Arete. 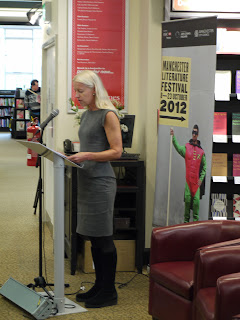 Next up is Julith Jedamus (above), also from across the pond, though this time from the States; Colorado, to be exact. "You'll have to put up with my half-American, half-English patois", she laughs before launching into a love sonnet. There are poems about Sweden, poems about the Netherlands and poems about the US - she says, "I seem to write a lot about fires", but actually I notice she also conjures up images of the exact opposite - snow and ice. She appears to be something of a linguist, too, telling us she has started learning Swedish (though she seems to think it's not going too well!), and she's also writing a book on Lorca, and presents two companion poems by him, first in the original Spanish and then in translation. 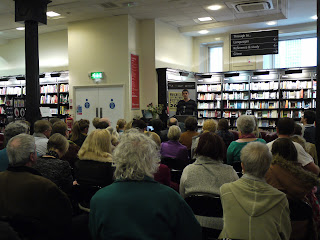 Our final poet for this event isn't from such a distance, though he has come down from Scotland, and he also plays with language and accents to add a further depth to his work. Smiling and confident, William Letford recites his pieces off by heart, segueing between slow, thoughtful and moving pieces such as Monuments of the Mind to fast, repetitive numbers like Worker and We Are. The diversity of his poetic style is as interesting as hearing about his background (he's a roofer by trade), and his performance is mesmerising.

A really varied session, and a great way to spend a lunch hour!

Sarah-Clare Conlon is a freelance writer, editor and press officer. Her award-winning blog, Words & Fixtures, is about language, literature, arts and culture.
Posted by MLF Blog at 3:06 PM