Of all the events at the Manchester Literature Festival, this was the one I was the most curious about, as I am a keen blogger myself and had been following the competition, seeing which blogs would be shortlisted in the various categories. When I arrived at the event, I was struck by what a cosy set-up greeted me. Although the room was large and there was a huge amount of people, it still managed to feel really intimate, and you could really engage with what was going on on stage.

First, several shortlisted bloggers read from their blogs. These ranged from The Most Difficult Thing Ever, the witty observations of a postman of his local area, to Sonnet Reviews, which features reviews, often of TV shows, each in the form of a sonnet. This was a really interesting concept and I enjoyed hearing the blogger reading his poems aloud to the audience.

The highlight for me was Her First Year, the story of baby Mia and her parents: Frances, who was 16 when she had her baby, and Hassan. I had read this blog before the event and had been moved by it, so it made my night when Len Grant, the photographer who created it came up on stage along with Frances, Hassan and Mia. It was Mia, of course who stole the show by trying to speak into the microphone, and by generally being adorable. 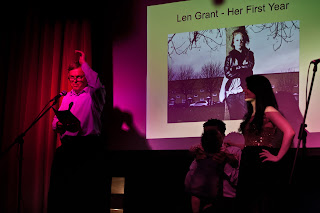 After the blog readings, we had a talk from the writer Adam Christopher, author of Seven Wonders. He read from the book, which is about Tony, a man who wakes up one day with super powers. He read well and the story sounds entertaining. There was then a Q&A session, in which we got the chance to learn more about Mr Christopher, for example his love of comic books, and the fact that he met his publisher and his agent through social networking.

After a short break… this was it - time for the presentation of the awards! I was delighted to see Her First Year win Best Personal Blog – it was a hugely popular choice with the audience, with lots of cheers! The Most Difficult Thing Ever won the award for Best Writing.

The awards were given out, and the winning bloggers went away very happy. I was certainly inspired by what I saw and heard; it has made me extremely proud to be a blogger. All in all it was a wonderful night, and I’m so grateful to the Manchester Literature Festival for organising this event to celebrate blogging, and to recognise what an important and effective medium for communication and creative writing it has become.

Throughout the Festival in 2012 we have been working with a group of young people to support them to become digital reporters, and to document a range of events from their perspective. As well as writing blogs and reviews, the young digital reporters have responded to our events using other methods such as photography, illustration and radio.
Posted by MLF Blog at 12:37 PM