The night starts with a reading from Matthew Hollis, author of the award-winning biography of poet Edward Thomas, Now all Roads Lead to France (which Hollis talked about earlier in the day: read the review here). Hollis is a poet himself; dealing in carefully crafted poetry about landscapes. Humans are engulfed by the environment in his poems, delivered by Hollis in a quiet, captivating voice. Between poems, he tells a story about losing a draft of one of his new poems, Stones, in the Thames, watching it float away while considering jumping in after it, “How much do I care about my poetry?” he says. It’s a strange juxtaposition, his hilarious banter between such quiet poetry, but it works.

Next up to read is Faber New Poet and Wales Book of the Year winner Joe Dunthorne. Author of the novels Submarine and Wild Abandon, the former of which was adapted into the extremely successful film directed by Richard Ayoade; the latter of which Dunthorne reads an extract from. Wild Abandon is a fantastic novel, and the extract he reads is a personal favourite moment from the book. There is such careful writing in the novel, which perhaps is a result of him being a poet. 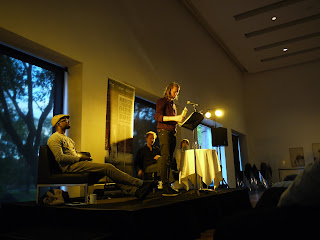 Finally up to the microphone is Inua Ellams, who says of his childhood that he, “grew up with misfits and nerds”, and goes on to prove it in his fantastic opener which contains a myriad of geeky references. His poetry is fast, fun and smart, and as a performer he has the most confident delivery out of all three poets tonight. It’s no wonder then, that he splits his time between poetry, radio and his one man show entitled Black T-Shirt Collection, which he reads from towards the end of his set. Black T-Shirt Collection is in Ellams’ own words about, “Nigerian corrupt politics, sectarian violence, homosexuality”, but, more overtly, it’s about two brothers trying to get by. The piece he reads tonight, Fragments of Bone is moving and brilliantly written.

The interesting thing about all three writers is their split personalities, writing wise. Hollis is a poet and biographer, Dunthorne writes prose and poetry, and Ellams is a noted spoken word performer, graphic novelist and playwright. How do they know when something should be a poem, or a novel, or a play? “Whatever I ought to be writing, the other option seems much more appealing,” Dunthorne explains, and describes a whole folder of writing on his computer which contains the remnants of poems that should have been prose, and prose that should have been poetry. It will all be used, and indeed some of it already has. Hollis says writing in different forms is useful, and it’s good, “having a 360 degree experience of literature”. After tonight’s event, it’s clear everyone in the audience got that.

Daniel Carpenter is a writer and one of the organisers of the monthly spoken word event Bad Language.
Posted by MLF Blog at 3:54 PM