I’m back in City Library’s Becker Room, today to hear Yvvette Edwards and Robert Williams talking about their new novels. Edwards’ debut novel A Cupboard Full of Coats was long-listed for the Man Booker Prize and Williams’ How The Trouble Started led to his description by the Metro as "a master at writing about sensational subjects with an uneasy, queasy understanding".

Williams talks first about his writing process, telling us that with both his novels he began with an opening line, preferring the excitement of allowing his stories to develop before his eyes, rather than planning ahead. While this method caused no problems with his first novel Luke and John, which won the Betty Trask Award and was shortlisted for numerous others, it didn't work the second time round. He tells us that after writing for six months, developing the original first line of How The Trouble Started - about a boy who keeps on running - he found that he had no story as yet, and when the eureka moment occurred and he knew why his protagonist was running, he realised that the tone of most of what he had written no longer fitted the subject matter, and had to rewrite most of it. He reads a section about the boy at eight years old being interviewed by police. His first person narrative really portrays the boy’s lack of understanding at his situation. It is only after reading a second section that we understand what has occurred. The boy has killed a two-year-old child.

Yvvette Edwards’ inspiration for A Cupboard Full of Coats came from the story of a friend who, after two years of going to court to take out restraining orders and injunctions on an abusive boyfriend, had read in a newspaper that the ex-boyfriend had murdered his next girlfriend. Edwards tells us that the boyfriend had had a really nice friend and her surprise that the two could be such close friends led her to explore the relationship in her novel. She is keen to speak about how she wished to capture her own experience of being a second generation Montserratian growing up in London, particularly as Montserratian culture is disappearing due to an exodus of locals from the island due to its active volcano, and its influx of economic and scientific immigrants. Her reading describes her protagonist Jinx’s thoughts at the age of 16 when her mother, who has been single since her birth, has a new boyfriend move into their house. What stands out most is the frank and unashamed nature of her descriptions. 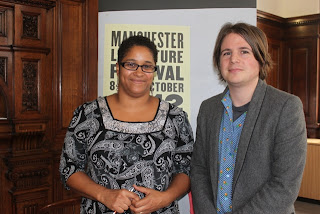 The pair are then interviewed by festival coordinator Jon Atkin, whose first question regards the decisions of both authors to write their novels in the first person. Both agree that they enjoy living in their characters’ heads and like the intensity and immediacy of the first person, while Williams continues by explaining that he wished to follow in the momentum of his first novel, before experimenting with other styles, but tells us that his current project uses the third person. On the subject of setting, Edwards tells us that she enjoys reading novels set in places she is familiar with, which led to her decision to set her novel in Hackney where she lives. Williams, however, who sets How the Trouble Started in a semi-fictional Northern village, says that when he reads books that describe familiar places in ways he doesn’t like, it often ruins the book for him, and also believes that when books are set in real places, these places can put readers off. He does agree that it is useful to base generalised settings on familiar places.

While Stephen King argues that each writer should have a vision of an ideal reader, the pair agree that they both write for themselves. They also both think that reading other people’s work during the writing process can be very intrusive on their own work. On the question of how they decide whether their writing is suitable for younger people, Edwards argues that young people today are desensitised to what may have been unsuitable as the older generation grew up, while Williams believes that it’s a matter of tone, telling us that his first novel, which was labelled for young adults, had a hopeful outlook, while the new one, which is labelled adult is far more bleak.

Michael Smaczylo is a gap year student who has just completed his A-levels at Manchester Grammar School and hopes to study English Language and Literature at university next year. He Tweets as @mashsmaczylo.
Posted by MLF Blog at 3:36 PM