Looking back not in anger

A new writing competition, Postcards From The Past, launches this week, coordinated in partnership with Manchester Children’s Book Festival and Manchester Creative Learning Network. The contest will be launched at our event tomorrow with Alex Scarrow, author of the time-travel adventure series for young adults, TimeRiders.

MLF: The Postcards From The Past competition is one of the projects that gets underway during MLF. Can you explain a little more about it and how people can get involved?
KT: Postcards From The Past invites participants to write a postcard (no more than 200 words) from a specific year in history as if written by a fictional or real character. It is free to enter, with categories for age groups 8-11, 12-16, 16-18 and adults (18+), and runs until July 2013. Winners will receive 100 copies of their postcard, professionally illustrated and designed, plus a full set of postcards from celebrity contributors and from other category winners. We’ve got lots of events planned to tie in with PFTP. So far, we've got  a ‘Postcards from the Dead’ competition arranged, which is linked to the MMU English Department's upcoming Gothic Day for A-level students.  Z-arts centre plan to do two themed competitions – one focusing on Moss Side and their Christmas show, Pinnochio; another on Hulme. We will be working with MEN Media on a Postcards from Christmasses Past project, which will be promoted via local newspaper titles.

MLF: The characters created by Alex Scarrow, who launches the project on Friday, travel back in time to eras such as Victorian England and events like the American Civil War. Can contributors send postcards from any period of history?
KT: Yes, people can select any particular year, as long as it's in the past.

MLF: So, why are we looking backwards and not forwards?
KT: We did a joint competition with MLF last year called Future Manchester, which looked into the future, so we decided, this time, to go backwards. Future Manchester was an English/science cross-curricular project for schools. Postcards From The Past is open to schools but it is much broader – aged 8+.  We are keen to promote this as a cross-curricular project for schools, too, though, by using creative writing and other subjects. History is the obvious choice, but we’d like people writing postcards to research key events and periods relevant to other subject areas. I’m based in the Humanities Faculty, so we are particularly promoting English, sociology, politics, philosophy, history and languages. 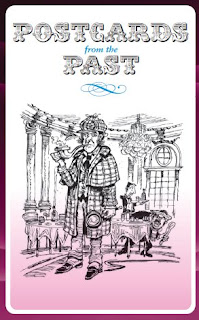 MLF: How many different designs will be produced and who will be illustrating them?
KT:  If you have a look at the website, you'll see some postcard samples – we will be producing more as we go on.  The design is by Steve Kelly (MMU Design Studio) and the illustration is by freelance illustrator and artist Dai Owen.

MLF: Who will be judging the postcards?
KT: MMU students and MLF/MCBF staff will judge the competition.We also want people to pick up the competition and run their own mini-competitions, and there's more information on the website about this.

Visit the PFTP website or the MCLN website for full details.
Posted by MLF Blog at 6:34 PM