It’s standing room only at the Anthony Burgess Foundation to hear Wang Anyi talk about her life and work. I did not know Wang Anyi’s name before I heard about her appearance at MLF. Browsing through the festival brochure, I noted a reference to her being co-author of Temptress Moon. I saw the film 15 years ago, and was struck by its visual beauty and controversial subject matter of opium addition in 1920s China.

The Chinese countryside estate of Temptress Moon is a long way from the bare brick-wall surroundings of the Anthony Burgess Foundation. The hour starts with Wang reading an extract from her novel The Song of Everlasting Sorrow. Luckily, the relevant pages are printed in English for those of us not fluent in Chinese. 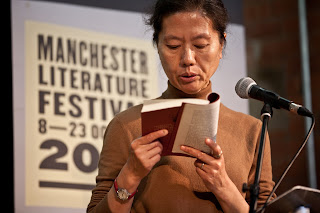 Following the reading, questions from Chairperson Anita Sethi prompt full answers from Wang. She contrasts the novelist’s role with that of the historian. She says the former’s job is to describe life at the micro level. Our lives may be grains of sand she says, but, when examined, they can be partly understood in the context of wider historical changes.

Wang’s parents were both distinguished writers themselves. However, her mother, like many other parents, wanted Wang to be a doctor. Perhaps this wasn’t so surprising given that Wang’s father was identified as a "rightist" by the authorities at the time. She tells us that political changes of the 1980s were decisive in opening up her career as a writer.

It’s fascinating to hear Wang talk about growing up in Shanghai. She describes it as a unique city in Chinese terms – both relatively prosperous in places and shaped by its French colonial past. Interestingly, though, she says that commercial publishers were not keen on The Song of Everlasting Sorrow's introductory section about the city. This led Wang to publish the book with a university press.

The event is promoted by Manchester’s Confucius Institute and one section of the audience is made up of young Chinese people. This creates an interesting time delay where they often laugh at one of Wang’s witty answers while the rest of us wait for Jin Liu, who is sat next to the writer, to translate them into English for us.

Wang is particularly entertaining when answering an audience question about the Cultural Revolution. She relays anecdotes about its impact on Shanghai fashion. She describes both a sinister and comical state of affairs where someone wearing the wrong type of shoes could have them removed by revolutionaries. Some young women, she says, took to wearing facemasks although I wasn’t sure if this was to placate or rebel against the fashion police.

Sadly, the extra time required to translate Wang’s answers inevitably means there is not much opportunity for audience questions. I miss my chance to ask about Temptress Moon but I come away with a much richer understanding of a distinguished Chinese writer. Sometimes a good translation is all that is needed to bridge the gap between East and West.

David Keyworth is Chair of the POETICA group which meets at Manchester City Library: poetica_mcr@yahoo.co.uk. This year he won the poetry category in Salford University’s WriteNorthWest competition. He is also a qualified journalist and contributor to the website Weekend Notes.

You can read more reviews of this event, by students at the Centre for New Writing, on The Manchester Review.
Posted by MLF Blog at 11:48 AM