Words by R. J. Owens. Photograph by Jon Atkin.
Imagine a literary culture where we could choose what books we read? I’m not talking about browsing and picking as we fancy from the shelves of our local bookshop. What if we could really be involved in the early, creative stages: lending our support to new ideas; seeing them transform and take shape under our watchful gaze?

This is an idea dreamt up by Unbound, a publishing house which, if you’ll pardon the pun, doesn’t exactly do things by the ‘book’. They’re here tonight to showcase some of their newest titles. Co-founder John Mitchinson begins with a few words about their revolutionary scheme, explaining how it allows authors to pitch their book proposals via Unbound’s website. Readers can then pledge their support and increase the likelihood of publication, earning different rewards based on how much they pledge. The rewards are eclectically exciting, promising everything from meeting authors to a trip to Stonehenge. John says, “Unbound’s main function is to put ideas for books in front of readers and gain their support – it’s about readers and writers.” Intrigued by the ballot papers handed out at the start, the audience and myself listen as we are told we have the opportunity to pledge for the books featured today.

With this, the panel jumps into action. Known as the face behind Red Dwarf and with a total of 11 (and a half) books written to date, Robert Lewellyn is first up to the podium, embracing the audience’s warm welcome. His new novel, News From Gardenia, exists in a Utopian setting 200 years in the future and was birthed from a growing interest in renewable energy and the impending consequences of fossil fuel shortages, he explains. This novel sounds refreshingly positive, imagining a future world where we actually made the right choices. The reading follows, immersing us in an inventive, yet perfectly plausible vision of our future, complete with battery-powered planes and humans who can live to be 136 years old. The audience is captivated by Robert’s vision, made real through his energetic performance. In one instance, he twists and gurns his face, adopting a tremendous lisping overbite, to raucous laughter from the audience. 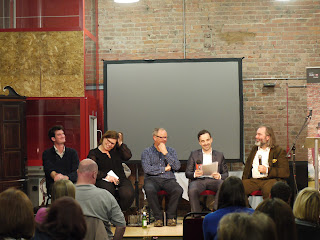 Next we are treated to an interview with Manchester-born and bred blogger Shaun Usher. Shaun’s new book Letters of Note, is based on his compelling, beautiful and oft-times poignant blog of the same name, which collects letters, postcards, telegrams, faxes and memos for the public’s perusal.

The blog has rallied a loyal following and Shaun enthuses about the unlimited aspect of his material, saying he has received feedback from readers delighting in the fact that they don’t know what they’ll read next. We soon understand their delight because Shaun has a few of these surprises hidden in his bag tonight. He produces several gems for our eager ears including: a Fawlty Towers rejection memo proclaiming the script “as dire as its title,” and a 9th-century letter from a Chinese official to a dinner host apologising for drunken behaviour.

Having visited Letters of Note myself, I’d been particularly looking forward to this part of the event. I have to say I was not disappointed as I marvelled at Shaun’s creation, an extraordinary tapestry of the past through which we can marvel, laugh, empathise and learn more about humanity.

To follow is probably the most famous face of the evening: stand-up comedian Katy Brand. The anticipation in the room is practically tangible as she modestly reveals more about her book in the making: Brenda Monk is Funny, a semi-autobiographical and comedic novel about the tempestuous life of a female stand-up comic. With an air of secrecy she launches straight into the reading, giving a teasing, taster chapter that demonstrates her talent as a comic monologist. Katy Brand delivers with ease Brenda’s observant punchy little one-liners about life and love. The chapter ends and a flurry of paper signals the audience reaching for their ballot papers, desperate to find out more.

A surprise bonus comes in the rather Basil Fawltyesque form of George Chopping, whose previously unassuming presence at the end of the panel suddenly stirs and becomes animated. He is one of Unbound’s raw talents, and, as quickly becomes obvious, a true performance poet. His quickfire round of poetry leaps from his mouth at high speeds, surprising the crowd with risqué wit, satirical humour and clever word trickery: “I’m not a monogamist, I’m a mahogonist”, he proclaims, in an ode to a girlfriend that likens her not to a flower, or a summer’s day, but wood. It is a performance delightfully aware of itself, as George regularly interrupts himself to make a side-note or analyse his own turn of phrase, providing a hysterical finish to an evening brimming with many different literary flavours.

R. J. Owens is a Manchester-based writer and editor. She has written reviews for All About Audiences and worked as a features editor for blankpages.
Posted by MLF Blog at 3:25 PM