Two and two is four 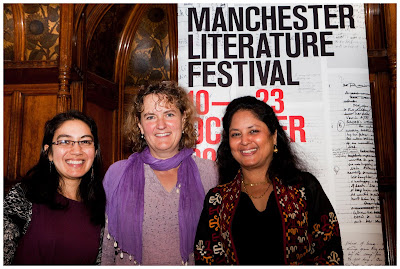 The first instalment of the South Asian Writers double bill is commencing any minute now. Manchester Town Hall’s Banqueting Room is a grand setting. The remarkable arched windows and the noble greens and reds used on the walls house the excited whispers of the attendees while they take their seats.

It is colour that next arouses the senses as Dipika Rai is reading from Someone Else’s Garden, her novel set in rural India. Dipika is giving a rather evocative description of Lati Bai, the protagonist’s mother, giving birth to her last child. Lati Bai prays through labour pains and recalls all the colours she has attached to her children at birth. Colour is ingrained in Indian culture and the landscape, and Lati Bai has given birth many times in the same field at different seasons. It makes perfect sense that one of Lati Bai’s children would be yellow, the colour of mustard seeds. The mood shifts as Lati Bai ponders her situation having given birth to another girl.

Dealing with themes of infanticide, arranged marriages and religion through the female protagonist Mumta, Someone Else’s Garden explores how it is possible that brutal social injustice can occur in the context of spirituality. Dipika explains that the novel is not intended to be forgiving of that brutality, but, in context, allows consideration of the causes which give rise to it. As I’m listening, I’m humbled. The complexities surrounding the issues come to the forefront, as does the universal nature of social pressure and financial hardship.

Tahmima Anam takes to the microphone and is discussing her new novel The Good Muslim. The story is set in the aftermath of war in Bangladesh, and follows a family caught in conflict, namely a sister and brother, Maya and Sohail.

Tahmima is reading a passage from her book in which Sohail’s mother’s defines the moment her son was lost to her, describing the acts of violence he has committed as a guerilla fighter. It is these actions which Sohail himself is struggling to come to terms with, and his doubts steer him to his faith. A rift in his family develops, particularly with his sister Maya who has rejected her faith. Maya is an activist, secular and Marxist, as were both siblings when they were revolutionaries together.
Tahmima raises a significant question about her own work: Who is the good Muslim? She is going on to say that all the characters in the book are Muslim, and it is easy to see one Muslim world. In reality, as people the world over tend to do about all sorts of things, Muslims argue with each other about what their faith means, and some of them reject it, like the character of Maya.

Maya is also struggling to settle back into the ‘smallness’ of life having been a part of something so much bigger than herself. Maya remains an activist in a way that she can be now the war is over, but battles with the difficulties that go along with that.

There are similarities in both Tahmima’s and Dipika’s novels regarding women’s roles in society. A parallel is drawn with British women before and after the Second World War. Someone asks how the writers think their work will be received by different readers, in the UK, in India and Bangladesh. The audience starts to laugh as Tahmima explains that the difference between giving a reading in Manchester and giving a reading in Dhaka is that in Dhaka someone will say “I’m sorry, you got that wrong. The curfew was three not four.” Tahmima goes on to say that people feel very strongly about the time they lived through. They are happy the events are in a book, and are complimentary of the work, but ultimately it’s their story, and they will feel compelled to hone the details of the country and events that belong to them.

The audience is keen to know about the responsibility the writers feel when discussing these difficult themes. Both writers seem to suggest that while journalism allows you to be political, writing a good novel can open people’s hearts. It is certainly true that empathy is a powerful thing. One reader conveys the emotional impact Someone Else’s Garden is having on her and that she is sticking with Mumta’s journey to the end. I think we can safely say that these writers have done their jobs well. 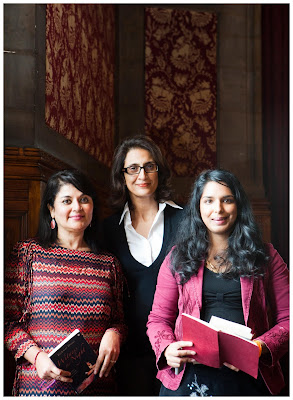 We stay in the same venue for the second part of the South Asian Writers double bill. Manchester Town Hall’s Banqueting Room is as striking as the work of the writers we have heard and are about to hear.

Kishwar is reading from her novel which is set in Punjab. A young girl is accused of killing her family and is placed in judicial custody. An alcoholic Asian female social worker called Simran takes action to unravel the truth about the case.

Kishwar reads beautifully and comically, highlighting the differences in personality between the accused and the social worker. Laughing and applauding, the audience is delighted with Kishwar’s description of Simran, the opposite of what a good woman in her culture should be, cursing and complaining of a banging head after a night of drinking.

When asked about inspiration for writing, Kishwar confesses that as a child her family moved around a lot. Her father was a policeman forever being transferred somewhere else. She says she was always making new friends and reading books. The books she liked most as a child were the books her brother read, featuring cowboys, often in Texas, with some kind of moralistic sheriff who was riding into town and executing justice in impossible situations. This is sounding like the blueprint for Simran — a crusader, a real trooper.

The final writer to speak as part of this double bill is Moni Mohsin. Moni is reading with a different approach to the other writers today. Her style is satirical, using "chutnification" in her language which lightens the mood, yet her work is still dealing with the difficult issues within Pakistan, what can be described as an almost low-level war situation. Tender Hooks examines how life goes on despite these issues, and features a character who believes she is a safe, comfortable distance from the goings-on. Moni also reads from The Diary Of A Social Butterfly, a journal of a privileged woman living in Lahore. Among the imagery I will never forget, because I was laughing so much, is the hilarious illustration of newspaper ads taken out by police. The ads are advising Lahore citizens to be vigilant of people who look a bit fattish in their "top halfs" (suicide vests do nothing for your figure, na), and the young man who had a suitcase lying next to him which the protagonist could swear she heard ticking. Her servants look at her like she is completely "crack" when she tells them she has only just foiled a suicide bomber all by herself.

Growing up on a farm with a poor TV signal, Moni explains that her inspiration is rooted in books and the stories her mother and grandmother told her as a child. She reveals that she comes from a family of mimics, always observing the idiosyncrasies of people. She is interested in uncovering and examining the hypocrisies in life, the contrasts in what people say and what they do, using humour and satire to entertain and inform.

The humour aside, the conversations don’t shy away from the difficult subjects. Both books are united by the word "tender", and the juxtaposition of tenderness with brutality. Kishwar is describing the passion that spurred her into writing her novel, and the mood is reminiscent of Tahmima Anam’s and Dipika Rai’s talk — the novel is empathetically powerful, and it can transcend the caricatures we sometimes become desensitised to through the media.

L.J.Spillane has a writing blog at www.ljspillane.com. You can catch her on Twitter at @LJSpillane.
Posted by MLF Blog at 1:20 PM