A bit of Northern honesty 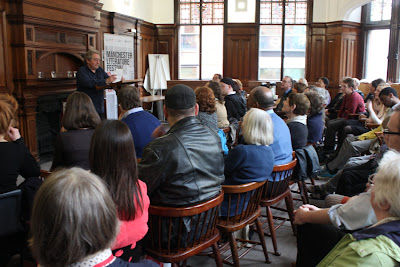 It’s day 12 of the Manchester Literature Festival, and on a sunny Friday lunchtime, I find myself squeezing into the brimming Becker Room; a charming Victorian room on the first floor of the City Library. Festival director Cathy Bolton points me towards a wooden chair that was resourcefully being used as a doorstop; allowing the final trickle of Northern blood to enter.

Luckily, I now find myself sat in the front row.

Immediately Cathy walks to the front of the crowded room and announces today’s celebration of The Poetry Business’ silver jubilee and 25 years of The North: a magazine capturing Northern poetry, articles, reviews and features.

Editor of The North Peter Sansom springs towards the mosaiced fireplace. While holding his reading glasses in his right hand, Peter begins to read from the latest publication; the first is Stay, a poem by Jeanette Hattersley. The poem takes us to Darlington through the poet’s gentle reminiscences. Peter tells us that this 25th anniversary edition of The North celebrates by reprinting some of the most popular poems in the magazine’s history.

We experience this first hand now through further readings of Simon Armitage’s Zoom and Suddenly by Diana Hendry.

Allison McVety now takes to the stand, dressed in coordinated chocolate brown and a striking red lipstick. She explains that Manchester is her home town; even though she now lives in the South. She recalls her days at Whalley Range High School with its brown uniform and the bus conductor who would get away with unbuttoning school girls’ blouses. She continues by playfully sharing her long-term love with a boy whose name she still does not know. She calls him Boy On The Bus and now reads a poem about him dressed in “air force blue”, “casual cool” and her lonely “17 stops of feeling blue”.

Her next poem paints a picture of post-industrial Manchester in Urmston Brickworks. Here we learn of her frequent escapes from her mother-in-law, who lives in Flixton.

She receives a rapturous applause, disturbing the silent room after each reading. “At home”, she tells us, “I would never get this, the dog will yawn and my husband will tell me he is going out.”

Her next poem was published in The North issue 41. Before she begins reading she asks if there are any psychologists in the room. We look around and shake our heads in unison, intrigued by her question.

She reads from the poem, The Two Times I Saw Your Penis; a matter-of-fact poem about her father. With her audience bewitched by her frank and honest words, she now shares her memories of school, and in particular the times when she would attend school having not read "the right books". Fittingly, this poem is set in a library. She softly summarises how, “everything happens in parenthesis”.

Now Peter Sansom introduces the Northern poet Geoff Hattersley (pictured). He reads from the blurb of his latest collection. “Geoff Hattersley is a welcome subversive and ’the real thing’,” we are told. Geoff, in his baggy shirt and salt and pepper hair, stands up, faces the fireplace and takes a drink of water. He turns around and we hear his uncut Yorkshire twang. He tells us how poems were always from the South and was pleased to find this magazine that allowed poems about things like vests.

His simplicity makes us smile.

He reads from the poem His Fingernails, and plainly tells us, “I never quite knew what this one meant”. He continues reading about a pub in Barnsley and an old couple in the corner who never left, even when the pub was given a facelift to attract the local twentysomethings.

The afternoon now moves from the quirky to the surreal, with Geoff's collection of poems on "hebium", inspired by a dream in which a Dutch lady asked him, “Where’s the hebium?” His quest for the meaning of hebium sparks off lines such as “you have a hebium infection” and “happy hebium honey”. The audience are now in stitches; the applause gets louder and takes longer to subside.

The afternoon has come to an end.

Seamlessly, the table of neatly arranged festival leaflets now becomes a shop, and we crowd around wanting to get our hands on the publications featured in this afternoon’s event.

Leaving the heaving room, my chair a doorstop once again, I begin to understand what Northern poetry actually is. It’s poetry that’s punchy, it’s distinct and it’s downright honest. But paradoxically, Northern poetry still embodies a universality that stems from its need to be ordinary and original.

Shaaheda Patel is a teacher of English Language and Literature at a sixth-form college in Blackburn. She blogged for the Festival in 2010 and has worked on literature development projects with Time To Read.
Posted by MLF Blog at 11:09 AM