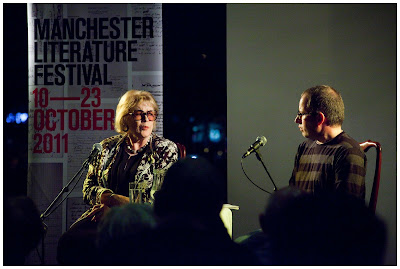 “At the dinner party, we sat at opposite ends of the table – which vexed me, as I’d been hoping to meet this man who everyone was talking about. The evening drew on and I had to leave with my friend – but before I did so, I walked over to introduce myself to him. So I said who I was, and that I unfortunately had to leave, at which he turned his extraordinary black eyes up to me and simply said: ‘Must you go?’”

Such was Lady Antonia Fraser’s account of her first meeting with the Nobel Prize-winning dramatist Harold Pinter in 1975, which she described to a crowded, yet hushed room under high white ceilings and mellow yellow lighting, in the Whitworth Art Gallery last Wednesday.

Of course, on that night in question she didn’t "go", so these first words of Harold to Antonia marked the start of a relationship that was to endure for 33 years – and inspired the title of her biography on him, published last year.

Must You Go? was written “with passion in 10 weeks”, Lady Antonia revealed, following Harold’s death in 2008. Quite a departure from her usual best-selling books on historical figures such as Mary Queen of Scots, it’s both a mourning and a celebration of the man and their life together, based on Antonia’s personal diaries.

On this evening in the Whitworth, Lady Antonia spoke to stand-in interviewer Jon Atkin (who did a sterling job at last-minute notice) about the love of her life and “one true friend”, reading extracts from the book that perfectly matched her conversational style: anecdotal and affectionate.

With a stately air and gracious demeanour, sporting a smart black-and-white floral jacket and a wicked sense of humour, Antonia revealed details of parties and playwrights; of family trips to Eastbourne; of a jolly cricketer who wrote sinister plays; of poetry penned in the intensity of passion celebrating “the breath we took when we first met”; and of the characteristically understated manner in which Harold received the news of his crowning career achievement – “I seem to have won the Nobel Prize.”

The audience Q&A also brought her other historical works into the conversation, allowing Antonia to touch on her forthcoming work, a book on the Great Reform Bill, for which she was visiting Manchester’s People's History Museum the following day.

But, as Pinter’s plays reveal, emotions can sometimes best be glimpsed in throwaway lines – such as Antonia’s quiet, matter-of-fact admission towards the close of our discussion: “I can’t read the end of my book – and I wrote it.”

That sense of enduring love and incredible passion, bubbling below the surface of a literary discussion, is what I’ll remember most from this evening with Antonia Fraser.

Rowena Roberts is a copywriter, editor and journalist based in south Manchester. You can see more on her website.
Posted by MLF Blog at 3:18 PM