On the buses with Anthony Burgess

Words and photograph by Daniel Carpenter 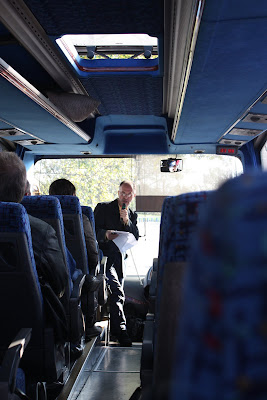 Saturday really was the perfect day for a tour around Manchester, kicking off outside the beautiful sunlit Cathedral where we were treated to an origin story, hundreds of years in the making.

Anthony Burgess was born John Wilson in 1917, but his ancestors arrived much earlier than that. He claims to be related to Bonnie Prince Charlie whose stop-off in Manchester is well documented. There are a fair number of things that Burgess lays claim to throughout his life, and if I’ve learnt one thing from the tour, it’s that Anthony Burgess lost his virginity at least three times, in three different scenarios, at three different ages.

I knew there was a reason I loved his writing.

Manchester is an ever-changing city, and there’s a sad side to constant rebuilding in that we lose a lot of the smaller places that once held meaning to us. There were a great many places on the bus tour - from the city centre north to Harpurhey and Miles Platting then south to Rusholme and Victoria Park - where we would be told, "this is where he grew up", "this is where he lived for a few months", only to be faced with wasteland. Indeed, as our brilliant tour guide, Ed Glinert* would often flourish traffic jams with bonus history from across the city, we learnt a great many things, hidden in the walls and streets.

Less a tour on the influence of Manchester on his writing, more a life story. With readings from his Burgess' autobiography, alongside biographers' views on the time, the tour was a balanced, effective and insightful look into one of the modern era's most prolific writers.

*Ed is running another tour tomorrow (Saturday), starting at 5pm outside the Midland Hotel. This Boho Literary Pub Walk will visit the watering holes once frequented by Manchester-based writers, including Anthony Burgess.

Daniel Carpenter is a writer and one of the organisers of the monthly spoken word event Bad Language. He blogs at Winter Hill.
Posted by MLF Blog at 11:05 AM