Imagineers of the Future 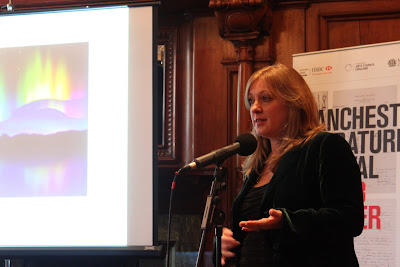 Hmmn, the apocalyptic consequences of climate change, and children’s literature. I’m not quite sure how this is going to work.

Julie Bertagna has clearly made it work however. Her trilogy of books for young adults: Exodus, Zenith and Aurora tell the story of young people fighting to survive in a world that is drowning in the melt from polar ice caps. They are highly successful; a fact evidenced by the excited kids on the front row of this event. Today Julie will discuss her work, and launch the Midland Future Manchester Competition; a contest for young people to write about the Manchester of the future.

I’m up quite early for a Saturday, and this, combined with the deep-pile of the Midland Hotel’s carpets, brews and biscuits, has me feeling very comfortable. And quite sleepy. Coupled with this, I am a 31-year-old sci-fi hater, so I’m not sure that I’m going to engage with this.

Julie romps through literary history’s vision of the future, with a rather wonderful evocation of Mary Shelley’s elopement with Percy and Byron (a “male Lady Gaga, no less”), neatly sidestepping the adult undertones. In her background to how Frankenstein came to be written, she evokes the summer of 1816 when the sun did not shine on ashcloud-shrouded Austria (not of course without its modern parallels), the claustrophobic atmosphere of these creative minds isolated in this wilderness, and the recent invention of electricity. Technological advances are never far from the main narrative throughout Julie’s presentation; in the past, iPhones would have been seen as “magic” (I still have a sneaking suspicion that they are).

From here, she gallops through Wells, Huxley, Orwell, The Matrix, Bladerunner and Doctor Who to arrive at her inspiration. A news clipping, read in a café in Scotland while stuck for ideas (all very JK Rowling) about the Kiribati islands, a real example of the burgeoning results of climate change. They are physically losing islands under rising tides, and “battling the sea as if it were an enemy”. The image of a homeless young man staring out to sea certainly is haunting. And I am fully engaged in the story.

Julie goes on to introduce her first book, Exodus, where she imagined the fate of the Kiribati islands projected out; her story is set “in a century of storm”, where great floods span the earth, and the residents of an Orkney island cling to their home as long as one of the relics of their history, a red phone box, remains unsubmerged. When one day they find it underwater, they have to leave their home and become refugees.

Cut forward to the floods of 2007, when an image of such a phone box, fully flooded, appeared into the news. Julie felt “as if the future had crashed into the present”. Since then, her much-loved hometown of Glasgow has been flooded, more floods over Europe and Asia, and then Hurricane Katrina.

Bleak. But Julie counters this view by engaging with human ingenuity to explain that “whenever humanity has been hit with a big problem – we’ve always found a way to survive”. It is this “discovery” that leads her to her story, of cities built in the sky to escape these floods. In the final book, Aurora, the floods have left Greenland exposed, and there is a whole new land to live on. There is indeed hope. These books sound brilliant. And the story, in Julie’s lilting Glaswegian accent, has the audience enthralled.

She then introduces the competition to the kids, the “imagineers” who she urges to “set your mind on fire”, and to pen a story about Manchester, at least 10 years in the future. She asks for ideas from the audience, and I am in thrall to these kids’ imaginations. The first envisages a world where the poverty line is tangible, rich and poor live respectively above and below ground, and do not know of each other’s existence. Another wants to write about boys and girls living on opposite sides of the world, as the government has segregated them by a huge wall. Two dissidents come together to proclaim freedom on top of the wall. This is fantastic stuff.

This has been an inspirational event, not least in the way that Julie has engaged the audience, and the kids, to discuss their ideas and visions. She has claimed that her favourite endings are those where we don’t know what is going to happen. Her storytelling, coupled with the ticking bombs of these imagineers’ minds, make me think that whatever happens, I want to read right to the end.

Jennie graduated with a Masters in Ancient World Studies from The University Of Manchester, and is currently in the research training year of a PhD. She lives in the Northern Quarter and likes writing words and making things.
Posted by MLF Blog at 4:10 PM