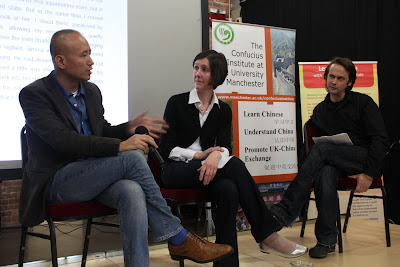 Of China, we hear so much, but sometimes know so little. It’s why the visit of the writer and film-maker Zhu Wen to Manchester was so engrossing. Born in the late 1960s, he came to prominence in the 1990s with stories that were attempting to reflect the reality of contemporary China; a state that has changed considerably over the last 20 years. Zhu Wen’s stories have been translated into English by Julia Lovell, and this event, to celebrate a new translation of one of his stories, due to appear in a Comma anthology next year, was supported by The Confucious Institute at The University Of Manchester.

I’ve read the stories collected as I Love Dollars and there’s a freshness and a looseness to his writing that seeks to give voice to the real China. The newly translated story, from which Wen read, as the English translation was projected to his side, tells the story of a student who goes from Nanjing in the south of China, to Harbin in the north, “The frozen city beyond the great wall”. It tells of a culture clash in this vast country, where the southern student dresses inappropriately for the cold weather and is shocked by the poverty of the friend’s family with whom he stays. A diet of pickled cabbage is dealt with by outside communal latrines which are “scattered with rods of excrement and icicles of urine”. It is a classic tale of a culture clash, where the educated southerner is shocked by the grim life of his northern countrymen, and the routine violence with which men treat their women. As the extract comes to an end, the narrator sees a woman who intrigues him, and when she turns, he describes her eyes as being “colder than the January wind”.

In questions from Comma editor Ra Page and the audience after the reading, Julia Lovell contextualises three generations of Chinese writer. Those born in the two decades after the war tend to write novels about China’s recent history, while those born since Mao’s death are far more commercial, writing in genres for the market. For Lovell, Zhu Wen is one of the writers of a “sandwich” generation, more avant garde in their style, and focusing on the “hurly burly of life in China today”.

Zhu Wen was an engineer and a poet before he was a fiction writer, and, fascinatingly, no longer writes stories, instead having become an acclaimed film-maker. Explaining this transition, Wen talks of film being a “a new love affair”, and reflecting his desire to try new things.

The audience is a nice mix of Chinese and English readers, and Wen is an engaging, albeit ironic, interviewee. When asked about the difference between a novelist and a short story writer, Wen says that the novelist needs “strong and muscular buttocks”, clearly an aphorism that Lovell can’t translate exactly. She talks about the difficulty of direct translation from the Chinese in a way that will make sense to English readers – and how it has helped that writers, like Wen, have been so open to her capturing the tone and style of their work for translation into English. For Wen, the book is remade when it is translated into English, so it becomes a different book, a collaboration between writer and translator.

It was a fascinating event in a number of ways – not least, because of how Zhu Wen has always been reluctant to define himself as a writer. Lovell says that on her visits to China she speaks to younger writers about who they read, and Wen is a name that frequently crops up as an influence. Little known in the West, and no longer working in the medium, his work is well worth discovering as a gateway onto a culture that is continuing to change at speed. Lovell makes the point that though we know little of Chinese literature, Chinese writers are far more open and aware of Western literature – and events such as this help to redress the balance.

Adrian Slatcher blogs about literary matters on Art Of Fiction and writes poetry and prose. His poetry collection Extracts From Levona was published by Knives, Forks and Spoons press in 2010 and Playing Solitaire For Money is out on the Salt Modern Voices imprint from Salt Publishing.
Posted by MLF Blog at 2:00 PM