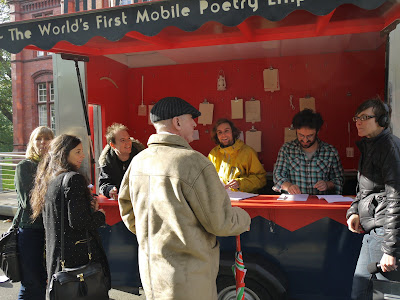 When I think of a poet, the image that springs to mind is a bearded, middle-aged Parisian, sitting in a café in Saint Germain, brooding over decadent verse, fuelled by the substances as familiar to his fingers as his pen; absinthe and tobacco. I am bewildered, therefore, upon arriving at the Poetry Takeaway event (the first time I have ever come into contact with these elusive creatures), to find the poets upbeat, down-to-earth and – dare I say it – normal. The "emporium", as it is referred to, looks delightfully awkward against the sumptuous backdrop of the Whitworth Art Gallery; its rickety structure almost visibly strained by an incredible amount of words bouncing to and from the assiduous minds of renowned poets Tim Clare, Dominic Berry and Rob Auton.

An idea brewed by Tim Clare and producer Tom Searle, the Poetry Takeaway Emporium travels the country’s finest festivals, creating made-to-order poems in under 10 minutes ("under 15 minutes!" squeals a pressured Dominic Berry), wrapped in authentic takeaway boxes and performed to the peckish poetic consumer – free of charge. Steady waves of people drift over to "order" their poems. The requests vary greatly from person to person. One man is resolute in his wish for a poem about confusion; 10 minutes later, Tim Clare is reading back his well-cooked poem which dealt with the terrifying truth that neither communism, capitalism nor socialism can "fix" society, and which ends with the profound comment on the covetousness of human nature, "if I see two bicycles, I want the best one".

As the effervescent, Manchester-grown Dominic Berry’s first Poetry Takeaway customer (finally, a claim to fame), I am initially asked for a vague topic upon which he should base my poem. Although I am desperate for him to create something reminiscent of Coleridge’s Rime Of The Ancient Mariner, the conversation takes a natural turn towards the horrors of the university application process. No, the idea of a poem about forms and grades doesn’t appeal to me much, either. But, 15 minutes later, Dominic steps out of the emporium and animatedly performs the poem he has written based on our conversation; an existential ballad about waiting for confirmation, with allusions to Coleridge and Yeats ("don’t step upon my dreams"). I am impressed to say the least.

This dynamic triad of poets has never before worked together at the Poetry Takeaway Emporium. It is, as Tim Clare so magically put it, an "unprecedented constellation" of poetic skill in an infinitive sky of accomplished writers. This remark particularly resonates with me, since the whole event seems so charmingly dependent on luck and chance; "remember Anneka Rice?", Dominic Berry suddenly asks - and she becomes the foundation for a poem titled Manhunt, requested by a presenter from Radio Manchester, who are broadcasting live from the event.

Poetry has always been viewed as something that feeds the mind and the soul of the reader. At the Poetry Takeaway, however, the poets are unanimous in declaring that, in fact, the "customers" feed their poems; Tim Clare recounts his becoming temporarily, and bizarrely, enamoured with lawn bowling, after being asked to write a poem on that very subject. "Suddenly their issues matter to you," he explains. "In fact, I’d say it was 50% about being a poet, and 50% about actually listening to other people." This is not an advocacy for literature and poetry; if the Poetry Takeaway chefs did not cook up poems that would satisfy the interests of the customer, then a nasty bout of poetry-poisoning could rear its monstrous head. Although I notice that most poems bring a warm smile to the customer’s face, Tim tells me gravely that about one person per shift will break down in tears. "Usually the poet!" quirks Dominic.

Gustave Flaubert is said to have spent up to a week sweating over each page of his novel Madame Bovary, indefatigable in his constant quest for "le mot juste". While I watched the poets frantically scribbling, their heads bent over the countertop, only their eyes visible above their raincoats, it occurred to me how astonishing it is to think that 21st-century poetry could be ordered, created and enjoyed, the literary equivalent of a guilt-free Big Mac; I believe it to be proof that we are living in what is indisputably an exciting time for English literature.


Isobel Buckingham is a Year 13 student at Altrincham Girls' Grammar School, hoping to study English and French at university next year.
Posted by MLF Blog at 11:33 AM