Ten years in the making… 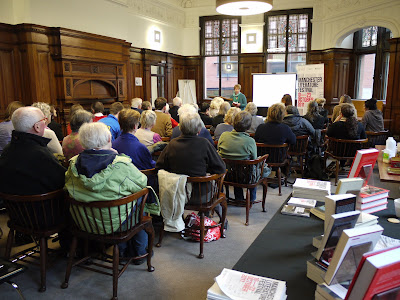 London, 1907. Imagine a young girl from New Zealand, dreaming of being a writer, just about to leave her teenage years behind. Her parents have not thought to inform her of the facts of life. She falls in love with a young musician, gets pregnant, panics. She decides to marry her music teacher, whom she does not love; but on their wedding night she cannot bring herself to consummate the marriage. Her mother eventually takes her to a German convent, and leaves her to bring the baby to term and give birth alone. The girl catches flu; the baby is stillborn.

This is Edwardian times so this shameful secret must never be spoken of again. "It marked her for life… It was the most important thing about her, the most true thing, and she couldn’t tell others."

The girl was Katherine Mansfield, one of the most influential short story writers of the 20th century, and Kathleen Jones, her most recent biographer, is recounting this to us. The audience hears the depth of compassion in Jones’ voice; and then the outrage when she outlines the actions of Mansfield’s mother: "It was such a callous act. I can’t believe anyone could do that to their own child."

Jones is a popular literary biographer of women writers ranging from Christina Rossetti to Catherine Cookson. She also writes short stories and is a published poet. It took her 10 years to research and write this latest biography, but her evident enthusiasm for her subject obviously lived up to the task. We hear the excitement in her voice as she describes arriving at one source’s house, someone she expected to have a small amount of relevant material – but then she was shown seven large boxes and to read them she had to stay for a week! We do not learn of her host’s reaction to this…

There has been a clutch of Mansfield biographies published already so the case is made for the new one, and I am certainly convinced. A wealth of new source material, some of which showed the extent of her husband, John Middleton Murry’s editing, is now in the public domain. Since the 1980s two scholars have worked tremendously hard transcribing diaries and letters, and Jones speaks of her huge gratitude to them for this. She is keen to rehabilitate the reputation of Murry, who seems to have been painted as Public Enemy Number One by many fans. Without his moulding of the "Mansfield Myth", Jones says the author would not be so widely read or known today. (He did benefit financially from this; he was accused of "grinding her bones to make your bread" and DH Lawrence accused him of "publishing her wastepaper basket".)

My interest is most piqued by the anecdotes concerning Mansfield’s talented contemporaries. At one point, she was struggling to find time to write due to their financial difficulties, constant house moves, and the "burden of domesticity". She met Rupert Brooke in the street and he asked, "Do you still write?" – a devastating inquiry.

Mansfield and Murry got to know Frieda and DH Lawrence; Katherine described them "as the only real friends we had", and the audience listens attentively to the complicated sexual and intellectual dimensions of this foursome.

And then there was the great friendship with Virginia Woolf; two equally brilliant writers and perhaps equally troubled individuals. Mansfield died, aged 34, from second stage TB. On her death, Woolf said, "When I began to write, it seemed to me there was no point in writing. Katherine won’t read it. Katherine’s my rival no longer."

There is more to add but limits of space mean I must stop! At the end, the bookstall quickly sells all their copies of Jones' Katherine Mansfield: The Story-Teller, and this seems a fitting end to a fantastic event.

We are in the Becker Room, on the first floor of the City Library on Deansgate. The room is Victorian; dark carved panelling, beautifully designed windows, each with stained glass at the top, and a moulded ceiling. It belongs to an age when illegitimate children were the ultimate taboo, tuberculosis was a death sentence, and a passionate, impulsive and extremely talented woman was made to suffer for her "sins". We owe many thanks to Kathleen Jones for delineating this life with such skill and verve.

The final words must come from an audience member: "You bought her to life as a person for me." What more could we ask of a biographer?

Charlotte Hubback is a freelance editor and a qualified counsellor. She contributed to Rob Frost: Reflections On A Life Well Lived (published by Authentic Media).
Posted by MLF Blog at 12:15 PM