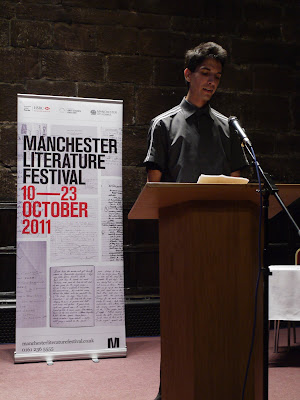 You know you're not going to be disappointed by a gala event when the two hosts are as dapper as Manchester University Press' Matthew Frost and Manchester Metropolitan University's James Draper. Also in their finery and gathered in the auspicious and history-steeped surrounds of the vaulted, pike-adorned Baronial Hall of Chetham's School Of Music are five of the eight writers shortlisted in the biannual Manchester Fiction Prize - "The glistening jewels in the MLF tiara," as Matthew so eruditely describes it.

Three weren't able to make the bash as - global award that it is - two (Nicole Cullen and Judith Turner-Yamamoto) are based in the States and one (Silvia Moreno-Garcia) is in Canada. One other American did fly in: Garret Freymann-Weyr, who is second up from those shortlistees in the room to read from her dynamic dialogue-driven story The Ugly Duckling. She follows Krishan Coupland (pictured), with his strange, emotion-steeped account of a woman "sleeping" in a freezer, Days Necrotic, which scooped two-thirds of the prize money. The other third is ultimately awarded to the third reader present, Richard Hirst, for the sneeze-ridden (the tale, not Richard) School Report. Alex Preston's delivery is very competent; his piece about the war in Afghanistan, The Swimmer In The Desert, laden with great language: "ugly fug of hot, damp air", "froth of sweat". Bethan Rogers' language in The Cuckoo is equally evocative - "he sees that she does not have skin; she has flesh" - and her reading, and narrative style, very engaging.

The stories are presented in the alphabetical order of their authors' surnames, and the missing writers' work is read by the three judges: John Burnside, Alison McLeod and chair of judges Nicholas Royle, who opened proceedings with their own pieces. In summing up, Nick explains what an incredibly difficult and lengthy task the judging process had been - 1,900 entries were received between the launch at Easter and the closing date in August. However, they were able to spot those that would make the longlist. Says Nick: "You know what's going forward. Sometimes it takes no more than a sentence. It's like being hit in the stomach - in a good way, if you can imagine it."

The standard was so high, in fact, that the judges asked if the shortlist could be increased from the original six to eight, and, in another departure from previous years, they asked to split the winnings between two writers. Once the contents of the silver and gold envelopes had been divulged, everyone could breath a sigh of relief - "It's been a tense old week," admitted the girlfriend of one of those who made it onto the winners' rostrum.

Sarah-Clare Conlon is a freelance writer, editor and press officer. Her award-winning blog, Words & Fixtures, is about language, literature, arts and culture.
Posted by MLF Blog at 1:35 PM