One of the first things Blue Badge Guide and Manchester Confidential Editor-in-Chief Jonathan Schofield tells us as we gather in St Ann's Square is that he won't allow his writers to mention the rain in their reviews. That's going to be a little tricky here, as we spend much of our one-hour literary tour of the city centre being spritzed on. Still, it doesn't seem to dampen anyone's spirits as we wander around looking at plaques and gravestones and signs and buildings, and we even draw curious glances from passers-by as we laugh at the anecdotes and quotations Jonathan shares with the 30-strong group - so much so that some people even tag along.

Under the canopy of the Royal Exchange, we hear about the disparate characters of Karl Marx (dour) and Friedrich Engels (cheery), who read together at Chetham's Library back in the 1840s. At the other end of the square, we learn of the beginnings of the Manchester Guardian in front of Thomas de Quincey's final resting place. Round the corner, up King Street, William Harrison Ainsworth's Regency house may have been replaced by a garish modern monolith, but the saucy extracts we're treated to here still stand the test of time. 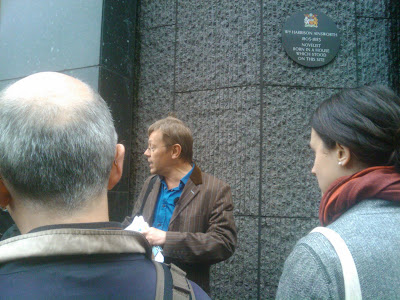 Next, we meander over to the Town Hall, which has in recent years hosted the likes of Carol Ann Duffy, Emma Jane Unsworth and Joe Stretch, and which was described in the 19th century by writer and art patron (he was a particular fan of Ford Madox Brown, whose murals live within the Albert Square structure and whose work features in a special Manchester Art Gallery show until 29 January) as "the most truly magnificent Gothic apartment in Europe". Over the way, Jonathan reads from Anthony Burgess' "autobiography" Little Wilson And Big God, describing "a bookish flat in Ardwick" where the author alleges to have been deflowered by a woman who studied Marx and Engels ("Whoever they are" - Burgess) and who the writer apparently met on the steps of Central Library.

We are referred to Manchester settings in Burgess' Any Old Iron and Howard Jacobsen's The Mighty Waltzer, then pop down the road to opposite the old Free Trade Hall, now the Radisson, where Charles Dickens spoke annually for 20 years back in the day. Jonathan recites some poetry by the rather more contemporary John Cooper Clarke, then we're off to the John Rylands Library on Deansgate to round things off with a bit of Elizabeth Gaskell. I learnt lots about literature in the Rainy City, and I promise not to mention the weather again. 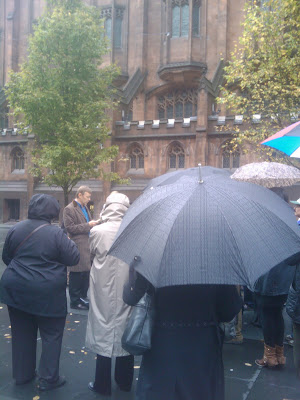 Sarah-Clare Conlon is a freelance writer, editor and press officer. Her award-winning blog, Words & Fixtures, is about language, literature, arts and culture.
Posted by MLF Blog at 6:35 PM