God and the devil 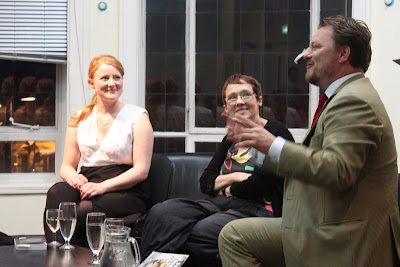 There’s a saying in Manchester that on the sixth day God created MANchester. While some may doubt the truth of this statement, what can’t be disputed is that on the sixth day of the Manchester Literature Festival, novelists John Niven and Emma Jane Unsworth held a hilarious reading of their new books, respectively The Second Coming and Hungry, The Stars And Everything.

Both novels are an irreverent take on conventional religion; The Second Coming is awash with blasphemous characters (including God himself) while Hungry, The Stars And Everything features a charismatic yo-yo playing devil.

Niven and Unsworth are both writers of fiction that defy standard classification; on a bookshelf they’d be more at home next to writers such as Chuck Palahniuk, Jonathon Swift or John Kennedy Tool. When introducing the novelists to the sold-out audience, Cathy Bolton, Manchester Literature Festival Director, summed up the pair as “two of the wittiest and freshest writers writing in the UK”.

Emma studied English literature at Liverpool University and is an accomplished writer of short fiction and a locally acclaimed journalist; her debut novel Hungry, The Stars And Everything follows Helen Burns, a 29-year-old food critic who is assigned to review a mysterious restaurant called Bethel. The novel, which is set in Manchester, interweaves tales of greed, addiction and alcoholism with "magic realism", hence the devil’s appearances throughout the book. Emma explained where the idea for featuring the devil came from: “I was really interested in fantasies, especially teenage fantasies and sexual awakening. The devil fitted into this as the ultimate rebel and master of temptation.”

Like Emma, John also studied English literature at university and has a background in journalism. The Second Coming showcases Niven as a master of writing sharp, funny dialogue which is embodied in a God that chain-smokes weed and swears like a trooper.

The novel is set around the premise that 57 years on earth equates to one day in heaven; God has taken a seven-day fishing trip around the time of the Renaissance, and on his return finds that things on earth have gone to pot. Originally written as a screenplay, Niven admitted he’d got 50 pages into it when, “I then realised that no Hollywood studio in its right mind would want to film it. I don’t usually have a fixed idea of what a character looks like, but when I was writing the screenplay I imagined God as a youngish Jack Lemmon, Jesus as Owen Wilson, and Danny de Vito as the devil.”

After giving hilarious recitals from chapters of their books, both writers went on to discuss genre and humour in their novels. Emma said: “I write what I love to read. You can get away with a multitude of sins if you’re funny. I’m always listening for funny observations and turns of phrase. You can use humour to change the tone of a novel. Humour’s a great tool as well as fun. I don’t feel I write within a genre. I’ve got the luxury of writing what I want to write. When I was working full time, writing was a hobby. For me, extended prose fiction is freedom - I’m determined to keep it this way.”

Echoing Emma’s sentiments, John also sees genre in fiction as something to be subverted and challenged: “Genre can be fun to play with but it’s more applicable when you’re doing something like a screenplay. Fiction is gloriously free in what you can do. Guys like the Cohen brothers defy conventions, and old conventions of genre are moving on.”

Emma and John met five years ago as the pair share a literary agent. Although the affinities between the two authors were markedly clear during their recital, they differed in some of their views, arguing at one stage over the old adage that "everyone has a book in them". Niven is openly cynical on this point, whereas Emma is a little more considered in her response, replying that “the mechanics of writing a book is hard. We’re novelists, not diarists”, to which Niven added, “Yes, that’s true.”

As the evening drew to a close, one member of the audience asked who their ideal readership is. Niven dismissed the concept of an audience altogether and went on to say that: “My ideal reader is the friend you love to make laugh in a pub.”
For Emma it was herself: “I have no one in mind when I’m writing. I sometimes imagine my worst enemy, someone who would really, really criticise me, so I guess I’m writing to impress my own neurosis.”

Either way, best friend or worst enemy, John Niven and Emma Jane Unsworth (pictured with Emma's publisher Hidden Gem Press' Sherry Ashworth) certainly impressed the audience at Waterstone’s Deansgate. Judging from the laughter and the volume of novels that were signed, it looks as though both of these convention-bending authors will get a sinfully good reception from critics.

Catherine Fearn writes a blog called The Poplar Tree – one of Manchester’s literature-orientated blogs, which includes editorial features on authors, reviews of books, films and anything in between, such as TV programmes and current affairs.
Posted by MLF Blog at 4:55 PM