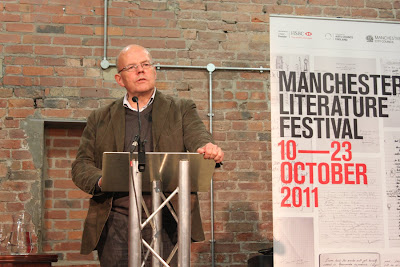 Judging by the number of people arriving to join this tribute to Linda Chase, founder of Poets & Players who died in April, I suspect the event could easily have run twice at capacity. Linda had been a keen supporter of tonight’s venue, the International Anthony Burgess Foundation, from its early days and it seems a fitting place to launch her new anthology, for Manchester’s Carcanet, Not Many Love Poems.

The evening begins unforgettably with music. The Mariachoos serenade the audience with a medley including La Bamba, Twist And Shout, Let’s Twist Again, Pretty Woman. It’s brilliantly funny (and good!), complete with huge wobbly moustaches. They follow with a moving version of The Kooks’ Valerie which comes “from the heart”.

Linda’s friends, colleagues and family members read poems from Not Many Love Poems and 2001’s The Wedding Spy. Most introduce their selections with some little nugget of personal memory about Linda.

The evening is introduced by Carcanet editor Michael Schmidt (pictured) who speaks about Linda’s passion for poets to read aloud – an idea to which she eventually brought him round. He even describes Found And Lost, which he reads, as needing to be “in the air”.

Jeffrey Wainwright describes Linda’s work as having many different tones in her voice and the two poems he reads are great examples of Linda’s richness. In Old Jewish Men, she writes in such strong and sure loving tones of “heart keys” and “love looseners”, which contrasts with Lost Souls From Christie Hospital, which is rife with delicate and confused fragility.

I really enjoy John McAuliffe’s reading of two conversational poems; they’re full of brightness and sensitivity. Dare is a reluctant discussion about death which is breathtaking and devastatingly powerful. Asleep And Awake similarly ponders on death, but with a more accepting, final-moments, perspective. Both these poems share a wonderful sense of rhythm.

Poet and writer Grevel Lindop tells the audience he shared a sense of writing about subjects “you’re not supposed to write about” with Linda. He reads the poignant Ticks And Kisses, dealing with mastectomies and the effects they have on people (not just the women who undergo them) which is shot through with humour and a deceptively light tone right up until the stark, final line.

Linda’s daughter Cleo reads Taffeta, a poem about Linda’s mother, Cleo’s grandmother. It’s a great piece of atmospheric, Chanel-drenched nostalgia for a 1950s housewife so perfect, as Cleo tells us, she even had curtains to suit every season.

James McGrath reads poems Linda wrote for her friend Ella, celebrating Ella’s home and friendship. Linda herself extended her home and family to so many that these themes – and the dining table motif, as James points out - come up repeatedly in her work. Gift House is a celebration of home comforts and the rich fruits of friendship.

Paying tribute to the speed with which Linda set up Manchester Poetry School, fellow poet Mimi Khalvati is clearly impressed with Linda’s "just get on with it"attitude (or the Linda-ness of Linda, as Matthew Welton describes it later). She chooses to read Yesterday which finds languid beauty in the Mersey’s flow and familiar changes from summer to autumn with “the reddening leaves, the bright berries splattered against the Wedgwood sky”.

Fellow Carcanet poet Carola Luther (Mimi and Carola both launched new Carcanet poetry collections at this year’s Manchester Literature Festival) says she’s reading First Thought, about the act of writing and of thinking about what you write, because she can hear Linda’s voice in it. The poem has a characteristic freedom and openness in the imagery, ending with, “a true writer is one who never lied”.

The tenderness of Night Vision, selected by Matthew Welton, feels almost too intimate for readers to be allowed in; it’s nearly a peeping Tom of a poem. “I open the duvet and draw you in / as the feathers fill their cases”.

Linda’s celebration of female spirit and independence in One Woman Dancing holds massive appeal for me. It seems to capture Linda’s charisma and inspirational nature, ending as it does: “I don't have to dance if I don't want to dance, / but I do, so I do. One woman dancing. / Look, there's another. And another. / Each of us out there, eyes shut, rocking. Yes!”

What feels abundantly clear, to me, from this glimpse into Linda’s work and her life - and in anecdotes tonight from those who knew her so well - is the importance, for her, of connection; whether as a response to the invasion of cancer, sharing family meals and stories, or giving thanks for a friendship. Linda’s body of work and the new collection Not Many Love Poems is filled with a graceful sense of movement, beauty and a very personal warmth.

Laura Maley lives and works in Manchester and blogs about arts and culture at Cultural Shenanigans. You can follow her on Twitter @elle_c_emm
Posted by MLF Blog at 10:56 AM