The changing faces of gay lit 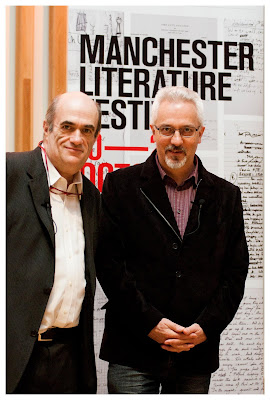 “I can’t remember when I even first heard of the sodding Booker.” Alan Hollinghurst (pictured, right) rolls his eyes and the most prestigious literary prize, awarded next week, is not spoken of again at this opening Manchester Literature Festival event.

Is Hollinghurst bitter not to have made the shortlist for his new book The Stranger’s Child? Should fellow panellist Colm Tóibín (pictured, left) have won for his brilliant Brooklyn two years ago? We’ll never know, but then, Hollinghurst and Tóibín have far more important matters to discuss; namely their thoughts on gay fiction and what it is to be a homosexual and a writer.

This is Tóibín’s first engagement as Professor Of Creative Writing at The University Of Manchester, and there’s no doubt he’ll be a huge hit, both with students and the wider public. Speaking without notes, the novelist, critic, short story writer and essayist is a natural raconteur, painting an evocative picture of Dublin in 1980. A place where homosexuality was something that was quietly navigated by the gay and straight community; where people were left to fill in the “gaps” of someone’s sexuality if they wanted to. “There were levels and layers,” as Tóibín puts it.

Tóibín was 25 then, and hadn’t written a word of fiction. But, he says, it was a chance encounter with a young Argentinian man living in a repressed Buenos Aires which changed everything. This man’s only image of who he was as a homosexual was a character in a new-ish novel. It made Tóibín think that he too might be able to find a fictional voice for people like this Argentine. And that book was Alan Hollinghurst’s The Swimming-Pool Library.

Hollinghurst is slightly bashful at the thought that he has been that influential - he’s a much quieter, more reserved character. But he agrees with Tóibín that for a long period of time, the book really mattered for homosexuals, that seeing gay relationships written down was really important. He wonders whether that thrill, that giddy sense of daring about writing from what he calls “the gay position” is no longer notable.

Which is a good thing in some ways. Some authors didn’t dare at all: Hollinghurst refers us to EM Forster, who gave up being a practising novelist after the publication of A Passage To India in 1924, because he was “stumped by the impossibility of writing about the thing that mattered most to him”.

These days, Forster would be free to write what he wanted - in most societies. As Tóibín semi-jokes, there are now so many straight authors writing convincing gay characters, the likes of himself and Hollinghurst will end up having to write about straight people. Which is, of course, exactly what he did in the Costa-winning Brooklyn.

“Brooklyn is about who you are and what you amount to,” he says. “And that can come from many sources. It can be your sexuality. But it can also be your memory. You have to see where the writing takes you.”

And the joy of Tóibín and Hollinghurst’s writing is that it takes you in many, many directions.

Ben East is an arts and culture journalist based in Manchester. You can follow him on Twitter @beneast74
Posted by MLF Blog at 12:35 PM