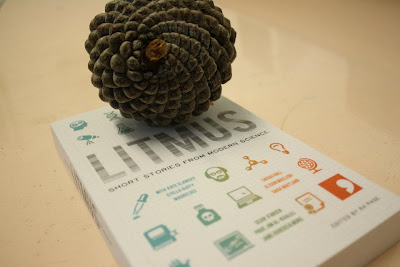 Bringing together the forces of the Manchester Literature Festival and the Manchester Science Festival, Comma Press invited an audience to their chilly but functional headquarters at MadLab to discuss and celebrate a figure very dear to the scientific heart of Manchester. For their latest anthology, Litmus, Comma paired off a clutch of top-quality writers with a gaggle of eager scientists to produce short stories based on Eureka moments from the history of science. A quick scan of the credits in the book reveals that many of the scientists involved are currently based at a Manchester establishment, so it seemed somewhat inevitable that the irrepressible Alan Turing would get sucked in along the way.

The subject of my favourite Manchester statue (sitting on a bench in Sackville Park), Turing is as famous for his turbulent and tragic private life as he is for his scientific genius and is one of the few Manchester heroes truly worthy of the accolade. The reverent atmosphere in MadLab therefore felt entirely justified and the excellent hour-and-a-half discussion worked its way into a beautiful homage.

Litmus editor Ra Page introduces proceedings by briefly explaining the tricksy concept of Morphogenesis, the subject of the afternoon. The mind-bending complexities of how one cell expands and evolves into a intricate living creature was the focus of Turing’s last great thesis and the inspiration for Dr Martyn Amos’ suggestion as his Eureka moment for Litmus. The lucky writer who claimed this difficult but alluring topic was Jane Rogers, author of The Testament Of Jessie Lamb and recently long-listed for the Booker Prize. Tasked with not only grappling with the mind and life of a well-loved genius, but also pinning down one of his trickiest concepts, the project was evidently no mean feat.

But what a success. Rogers reads an edited version of her resulting story, entitled Morphogenesis, and manages to bring both Turing and his concepts to life, intertwining the two into a biographical tale of love, loss and lightbulbs. From the delightful ("his destiny is in his cells") to the heartbreaking ("the law will not allow him to be the man his own cells tell him he is"), Rogers’ story and her exquisite reading of it seems to bring the man himself shimmering into the room, apple in one hand, fir cone in the other.

After the story, Dr Martyn Amos, head of Novel Computation at Manchester Metropolitan University, takes to the stage to further elaborate on Turing and his theories. Amos places a lot of emphasis on Turing as a "great connector"; a scientist and mathematician who was unafraid to cross and mix disciplines. Amos correctly notes that science needs more interdisciplinarians to collaborate and contribute to each other’s fields in an effort to better enhance their own. Turing was a great proponent of this, fuelled by his simple fascination in all areas of natural life.

A Q&A session follows and questions from the floor range from the one which forces Dr Amos to assure us that he is NOT A ROBOT and another from a scientist at the back which contains so many unknown words my brain melts and I am unable to write it down. Fortunately for me, most of the rest of the audience seems equally bamboozled! If, indeed, Turing’s spirit has entered the room it would perhaps have been enough to encourage one of his elusive smiles.

As one observer notes, by bringing together scientists and writers in this fashion, a natural metaphor for morphogenesis arises; the scientist plants the original seed and the writer encourages it to grow into a work of fiction. The Comma experiment is a success; a great homage to a true Manchester hero.

David Hartley writes short stories and even shorter film reviews. He can be found at Do A Barrel Roll and his other blog, Screen150, recently won Blog Of The Year at the 2011 Manchester Blog Awards. Find him on Twitter: @lonlonranch and @screen150.
Posted by MLF Blog at 12:42 PM