Poems from home and away 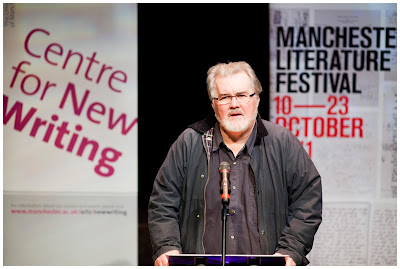 Clad in zinc like a huge roof tile, some might say that the Martin Harris Centre lacks the gravitas associated with other established poetry venues across the city such as St Anne’s Church, the Cathedral or Whitworth Hall. But once inside the 150-seat theatre, it’s easy to see, or rather hear, why the venue has become a favourite place for the MLF to hold its poetry readings.

In 2009 the Irish poets Michael Longley and Tom French graced the Martin Harris Centre for an evening of poetry, and then at last year’s festival the poet émigré Seamus Heaney took to the lectern at Whitworth Hall. Can you spot the MLF theme that’s emerging here?

John McAuliffe is the latest Irish poet to showcase his works at an MLF event, when usually he’s the one introducing the Irish poets. Luckily for McAuliffe, Vona Groarke was on hand to introduce the poet from Kerry, and the other highly acclaimed poet of the evening, Sean O’Brien.

At first it might appear (and hear) like McAuliffe and O’Brien are an unlikely pairing, but what unites the poets in their latest collections is an interest for exploring what it is to be away from something you love, be this a person, place or thing.

Of All Places is McAuliffe’s third collection which locates Ireland firmly at its heart. The volume balances between "home poems" and "travelling poems", and there’s also an argument for including "Manchester poems". McAuliffe received a glowing introduction from Groarke who said:
“We hardly need to introduce John; he’s a gifted teacher, generous colleague and a good friend. He has an encyclopaedic knowledge of literature and a boundless appreciation of good writing.”

McAuliffe’s recital began with the eponymously titled Of All Places, shortly followed by another home poem called Badgers, which recounts the story of Des O’Hare, an Irish republican paramilitary also known as the “Border Fox”. The poem looked at the transition from normal childhood anxieties to an awareness of deep-rooted political unrest.

Many of the poems which McAuliffe recited held a fascination for the everyday which he contrasted to poignant events. In Aerialists, the death of a circus performer a day after the poet had bought tickets to the show had an unexpected effect on him, while in Batman Returns McAuliffe depicted the time when a science lab his wife worked in was transformed into a film set. The poet’s obsession with contrasting the humdrum to the poignant came to the fore in Week Two, an apocalyptic poem which he described as “the imminent doom of things not yet gone”.

Perhaps the most visually arresting of McAuliffe’s poems from the evening was Transfers, which depicted the auction of Ireland’s state art collection on 24th November 2010. The poem had at its heart the theme of separation as it recalled the paintings that were dispersed across the globe. McAuliffe’s recital finally ended with A Midgey, a short poem that evoked the same warm feeling as drinking a glass of wine.

Sean O’Brien (pictured) raised a glass to Manchester by commenting on how well received his poetry always is by the city’s audiences. His latest collection, November, mixes places and memory with a dash of the absurd, and among the first poems he recited were The Thing, Collaboration and The Muse. In Josie, O’Brien recalled his earliest memory of a girl reaching out her hands towards him who was, “seen perfectly once / then never again”.

The mystery surrounding Josie represents an innocence and love which the poet can’t recover from, and the irrecoverable was also felt in a touching elegy he read out for his mother, and another for a friend. O’Brien commented towards the end of the recital that, “Elegy is dialogue. You know what the other person is going to say, and you have to leave room for them to say it.” In his echoing deep voice, O’Brien also recited two further memory poems from November, Great Junction Street and Narbonne.

To lighten the tone, O’Brien also included humorous, and at times, absurd poems including The Plain Truth Of Marmite and Counting The Rain, a poem about having OCD which began with the line “Check the gas and hide the back door key” and ended with a command to re-count the raindrops: “Now go outside again, and do it properly”.
By the time the recital had finished, O’Brien would certainly have had his hands full counting the raindrops, as the streets of Manchester were awash with rain. Over the course of the evening McAuliffe and O’Brien had certainly exemplified Vora Groarke’s introductory observations that “poetry takes risks with language and amplifies of our experience of what contemporary poetry can do and be”.

Catherine Fearn writes a blog called The Poplar Tree – one of Manchester’s literature-orientated blogs, which includes editorial features on authors, reviews of books, films and anything in between, such as TV programmes and current affairs.
Posted by MLF Blog at 12:56 PM