The PEN is mightier than the sword 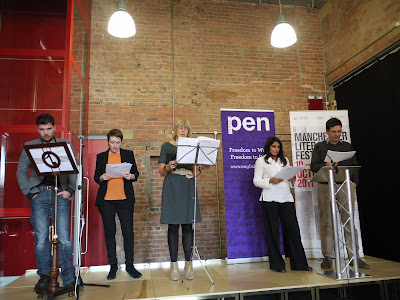 The International Anthony Burgess Foundation played host to a stimulating and original exploration of the history of English PEN as it celebrates its 90th birthday. The original format of the event entailed readings from two novelists, Edward Docx and Catherine O’Flynn, and two poets, Shamshad Khan and John McAuliffe. Between them, these authors read scripted scenes from the early days of English PEN, extracts from the letters and diaries of writers imprisoned around the world, and contributions to landmark debates hosted by PEN. The presence of these four distinguished writers, and their feeling for the words they read, brought to life vividly the history of this organisation, the profile of which is perhaps lower than it ought to be among ordinary readers.

English PEN (standing for Poets, Essayists and Novelists) was founded in 1921 by Amy Dawson Scott to promote literature as an aid to understanding among nations, and to campaign for the freedom to write and the freedom to read. This celebratory event began with a reading of its founding charter, including the memorable assertion that, “Literature knows no frontiers, and should remain a common currency between nations in spite of political or international upheavals”. Its members pledge to “champion the ideal of one humanity living in peace in one world”. Over the course of the afternoon, the importance of defending these clear and inspiring principles was eloquently affirmed, while the difficulties of defending them through the ensuing 90 years, in a world in which such motifs of mutual understanding have become unfashionable, were not glossed over.

It is through readings of the words of imprisoned writers that the reality of persecution and oppression is brought home – the diary of a Turkish socialist journalist, the letters of a South Korean writer, and the harrowing account of a persecuted Iranian writer. These performances were gripping, leaving no doubt of the indispensability of PEN’s work. The event then gave the audience a taste of some of the debates on free speech hosted by PEN, most notably the strikingly divided contributions to the debate that followed the fatwah on Salman Rushdie. Some made for uncomfortable listening, but in so doing they testified to PEN’s necessary role as an organisation within which delicate issues of freedom can be seriously debated. The idealism of its founding charter may seem problematic now, and the principle of freedom of speech less than transparent, but this only makes it more vital that the conversation continues. Increasingly, PEN has been involved in debates about how to respond to threatening and inciting speech, and the balance between protection and censorship; the evolution of its role was the subject of a lively question and answer session.

This was a well-structured event that left the audience persuaded that the struggle for the freedom to read and write is vital, and is far from won. The IABF, named for a writer who was himself no stranger to the controversies of censorship, was a fitting venue, and proves itself once more to be key part of Manchester’s cultural landscape.

Elinor Taylor researches 1930s literary Communism at Salford University, where she also teaches. She writes fiction and the odd poem.
Posted by MLF Blog at 5:04 PM