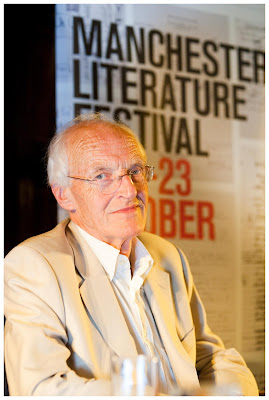 The banqueting room in Manchester Town Hall is quite the impressive venue. The grill in the fireplace has been formed into the figures of a lion and a dragon. The walls are wood-panelled to head height and above the panelling are swathes of heraldic patterning and paintings of former aldermen. Three giant chandeliers hang from the distant ceiling which is a lattice of wooden squares with sixteen-pointed suns staring blankly from their corners. The sun motif is repeated at the centre of the handles on the huge windows, decorated with stained glass at their peak and edges, which spread along one wall of the room. Through the windows we can see Albert Square, and beyond it the skyline of Manchester.

Someone brings a cup of tea and a milk jug to the stage on a silver tray. This is, like, well posh.

Manchester Literature Festival has a knack of finding great venues like this, of celebrating the city as well as literature, but we are in such a large space for a reason; it is needed to house the sizeable crowd that is gathering. The audience is made up of people of all ages, which reflects not only Frayn’s longevity but his ability to engage with new readers throughout his fifty-year career. Some are fans of Michael Frayn the playwright, some Michael Frayn the novelist, some even Michael Frayn the journalist, but tonight we are presented with Michael Frayn the biographer.

Frayn’s latest book, My Father’s Fortune, is a biography of his father; a salesman who overcame his difficult upbringing and a tragedy and the onset of disability in the middle of his life. Frayn was asked to write the book by his children, who felt that they had “arisen from an unknown place”, and was written from a combination of his own memory and what scant information he could gather from official records.

The move toward biography is not an unexpected one. Frayn’s most recent plays have been fictional portrayals of actual events. At one point this evening he claims his recent career has been moving toward fact, noting that as you get older you find more need to record events and a fading ability to invent. He then immediately, mischievously, undercuts this assertion by announcing his next book will be a novel with absolutely no grounding in the real world.

This playful tone is typical of the evening. Frayn is a lively and engaging speaker who gives us a speech that is filled with both anecdote and postulation. Instead of just giving us a brief outline of his book, he asks us to think about what the book is actually a record of. What is true in the writer’s memory? Why is memory fallible? Is one account of factual events really any closer to truth than fiction? He shows us how our eyes’ ability to only see a very small area in detail, and the periphery unclearly, results in having to move them rapidly to build the composite picture we actually see: and that this means that even our image of the present is in fact constructed of memories. My Father’s Fortune is, as far as Frayn can see, only as close to truth as anything ever can be, which is to say, not true at all.

This uncertainty leads Frayn to conclude by asking himself “Should I have done it?” The book offers him no sense of catharsis or "closure". Instead “it stirred everything up, and everything stayed stirred up.” He is sure his father would hate the book, and disagree with its version of events. I am pretty confident the rest of us will love it, especially if tonight’s intelligent talk is an indication of what to expect.

Benjamin Judge's blog, Who The Fudge Is Benjamin Judge?, has been shortlisted for Best Writing On A Blog at the Manchester Blog Awards.
Posted by MLF Blog at 2:27 PM