Get thee to a nunnery! 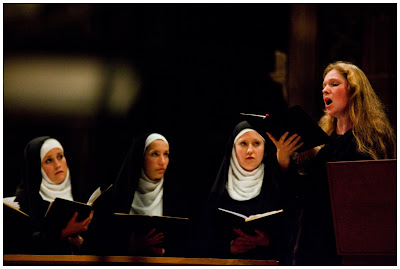 It’s a chilly Sunday night, yet tonight’s packed location has a warm and intimate cosiness about it, a sanctuary from the outside. The beauteous and perfectly appropriate setting of Manchester Cathedral will surely enhance the experience of tonight’s performance, set in a convent in 16th-century Italy. It’s radiant and ethereal in the evening candlelight.

Sarah Dunant is the bestselling author of The Birth Of Venus and In The Company Of The Courtesan. Tonight’s event is a semi-dramatised reading of her new, widely acclaimed novel Sacred Hearts. The book transports the reader back to 1570, a time of patriarchy when women were unable to choose their future, being forced to marry an eligible suitor or sent away to a convent. Shockingly, over half of noblewomen became nuns, and as Dunant states in the novel’s introduction: "not all of them went willingly".

The novel’s heroine, Serafina, is a fiery 16-year-old girl from Milan. By refusing to marry her suitor due to a passionate yet forbidden love for another man, she is confined to the convent of Santa Caterina in the northern Italian city of Ferrara. Included in her dowry is the offer of her exceptional vocal talent, to which she is expected to apply for divine worship.

The only love Serafina may indulge in is the spiritual kind. She must become a bride of Christ. Serafina, defiantly, does not take this lightly. Her first night confined in the convent walls results in a rage of despair. The wailing she produces grows so violent that Zuana, the dispensary mistress, "feels it in her stomach as well as her head: as if a wayward troop of devils had forced its way inside the girl’s cell and was even now winding her intestines on a split". Zuana has to sedate her, and a complex friendship develops, Zuana having once been an unwilling nun herself. Her reluctant entrance into the convent spirals a series of engrossing events, including an attempted escape to be with her love.

The performance involves a delicate balance of drama and narration from the book’s passages, by both Dunant and the actors. The audience is instantly immersed into the plot as, after a brief introduction, the actress playing Serafina throws herself to the floor in screaming anguish. She certainly looks perfect for the role. Her flowing, wavy locks radiate elements of the Renaissance. Meanwhile, Deborah Findlay’s lively channelling of the mysterious Suora Magdalena was entertaining; she spoke with vigour and perfectly captured an ancient lady’s cackle.

The evening is a distinctive approach to a reading event. The drama enlivens the literature but does not drown it, and the passages are able to speak for themselves. The event itself is also distinctively atmospheric. Despite such an abundance of attendees, over 400, the air is still and serene as viewers become locked into peaceful silence, captivated by a world unrecognisable from modernity.

The music is the highlight. Fortunately, for a great deal of this evening, Musica Secreta, a group dedicated to performing as women musicians in the 16th and 17th century, grace the audience with their angelic voices. It is calming in contrast to the turbulence of the story, and thus shows a different side to the rigid and claustrophobic life that the novel also explores. Of course, to be forced into a life without mortal love and passion must have been agony for some women, but it could also provide sanctuary from the harsh reality of what would await them outside should they to return without a role.

The couple sat to my side praised how the performance had effectively included the highlights of a large novel in just 90 minutes. They also said it was a shame that the climatic ending wasn’t acted out, but of course this could not be spoiled for future readers. Surveying the surrounding faces, many were mesmerised by the raw musical talent that echoed from the Cathedral walls. For those who had not read Sacred Hearts and may have found the swift pace and characters difficult to follow, the event would have remained a treat regardless.

Sarah Holland recently graduated in English Literature from Sheffield University and now lives in Manchester. She writes about the arts and has a screen blog, Girl On Film.
Posted by MLF Blog at 4:45 PM