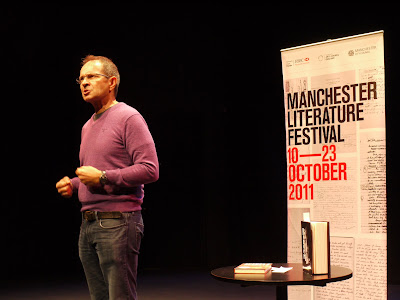 Allan Stratton's talk may have been one of the more intimate, less showy events of the festival; but it was all the more precious for that.

A small crowd of perhaps 30 gathered in a dark theatre space in Contact (a striking building just off Oxford Road that looks like a Space Invaders version of Warwick Castle with a few curves thrown in - it’s a performance space for young people which hosts theatre, art, music, spoken word, dance and DJs), turning their backs on a crisp autumnal afternoon, but fully prepared for another thought-provoking MLF event. I wasn’t the only one who found it even more stimulating than expected.

Allan Stratton is an award-winning Canadian writer for teenagers. His novel Life, Above All, was recently made into a film and nominated for Best Foreign Language Film at the 2011 Oscars (click here for a trailer).

Set against the Botswanan HIV/AIDS pandemic, Life, Above All recounts a 16-year-old girl’s experience of it; the different ways it affects Chandra’s life and her family, and her response to grief.

The event was a combination of readings and Q&A sessions; the first reading demonstrated Stratton’s ability to capture the teenage voice accurately: "All along we put on a calm face in public but come inside to cry… I also hate 'Trust God, he has a reason'… More than anything I want Sarah alive… I don’t even know what I feel."

He spoke of the way cemeteries are opened, then closed so quickly as they all fill up; they surround the city like a "ring of death". This vivid image brought home to me the extent of the epidemic in a way that a thousand statistics could not have done. The dead, including Chandra’s baby sister, just have bricks for gravestones, as no one can afford anything else.

The family dilemmas of a teenage mother who worries whether she or her child will die first, and how she can bear to tell her parents as she is their only child, were movingly delineated by Stratton. The book is now used with schoolchildren in Africa, as a kind of grief therapy: something to make any author proud.

The theme provoked a question about the dichotomy between the writer’s life and the heroine. The unanswerable rejoinder: "None of us have been medieval Danish princes but many actors have played Hamlet." Stratton did go on to reflect on the universality of human experience and the parallels between the New York 1980s gay scene, the US government response, and the contemporary situation in Sub-Saharan Africa. He was vituperative on the church, and particularly the Pope’s response; I was freshly outraged about the Catholic Church’s reluctance to endorse condoms. We reflected on the connections between blood, sex and death, and how that unholy trinity has a particular effect on us.

Despite the universality, it was not a complete surprise to discover the book was actually publisher-led. The audience seemed interested in the writing process and his confession of "worrying commas to death" will have struck a chord with the aspiring writers in the room.

I liked how solicitous Stratton was to us, making a real effort to answer questions loquaciously and fully, perhaps in contrast to more famous writers. His former career as playwright and actor helped to make the readings dramatic, tense and moving in turn: "I vomit at the side of the road. Jonah’s slept with Momma. Momma has AIDS."

We ran out of time (all those interested questioners!), and I was a touch disappointed that Stratton did not read from his new book Borderline, the story of a Muslim-American teenager determinedhttp://www.blogger.com/img/blank.gif to save his father from being convicted of terrorism. However, one could not doubt the value of what was covered. George House Trust, a local HIV charity, attended to distribute information, adding a uniquely practical dimension to the afternoon.

At the end, Stratton became philosophical, talking of the fear of failure, taking good health for granted, and how he uses the phrase "this too shall pass" – both in times of struggle, and times of success.

"AIDS is really a metaphor for secrets… All of us have secrets that we think if other people knew they wouldn’t love us so much, or respect us… that shame and stigma… and then the courage it takes to live with loss."

Charlotte Hubback is a freelance editor and a qualified counsellor.
Posted by MLF Blog at 4:44 PM