Everything really was All Write! 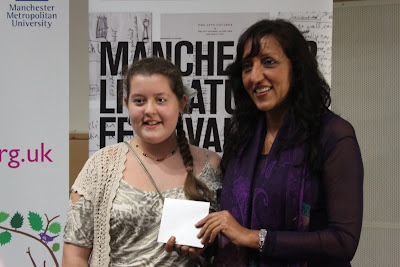 Despite the drizzly Manchester weather, the foyer of Lecture Room 1 is filled with excited chatter fluttering above the heads of primary and secondary school children; winners of this year’s All Write! creative writing competition. Teaming up with Manchester Literature Festival, All Write! has produced two inspiring anthologies from young writers across the UK and beyond.

Hosting this year’s event is Kaye Tew, organiser of the annual All Write! competition and Co-Director of Manchester Children’s Book Festival, and James Draper, Co-Director of MCBF and Project Manager of MMU’s Writing School.

With over 600 writers entering their work, the panel of judges have laughed, cried and fiercely argued about which pieces should make their way into the final collection. Fortunately however, this year has been special, giving a chance to younger writers by dividing the competition into two categories; Juniors (9-12 year olds) and Seniors (12-15 year olds). That’s TWO anthologies with around 130 pieces spread between them. Excellent!

After James warms up the crowd with his Brucie "Nice to see you, to see you?" catchphrase, the celebration begins. Presenting the winners of the Senior category with a published copy of their work in the All Write! anthology is poet and scriptwriter Anjum Malik. Anjum especially commends Maisie Twigger for her poem Lines (first page of Senior anthology), Declan Doyle for his short story The Assassination, Shannon Casey with her sonnet about teachers, My Sonnet, and Shakai Headley’s sonnet on computer games, Sonnet. Connie Bowles (pictured with Anjum) was commended for her witty poem Lady Gaga, and was overall winner in the Senior category.

In a contest to see which school can be the most supportive with applause and cheers, the overall winners of the Senior category make their way to pick up a collection of signed books from authors of last year’s Manchester Children’s Book Festival.

James then re-takes the microphone and tells us that the stories sent in for the Junior category had something missing... when the judges began reading the stories, images immediately began to appear, but these were only in their heads. Since this anthology is to be read by a new audience - children from primary school - the organisers decided it deserved to be illustrated, like the very best of children’s books. Rising from the front row, the official illustrator of Manchester Children’s Book Festival Dai Owen thanks the writers of these stories and poems for giving him such easy material to work with, as well as for the fun he had creating images like Jack and Jill as hoodies (Jack and Jill 2.0 by Tiernan Laird, Erin McShane, Ben McLaughlin, Eoin Dignam and Louisa Byrne) and the haunting bloody fingers from under the bed (Bloody Fingers by Drew Ellis-Wetherill).

James commends the Junior writers Farrah Nicholson, for her story Should Ronald McDonald Retire?, and Erin Wass, for her excellent perceptive poem of items in her teacher’s pocket, In Mrs Burgess’ Pocket. Overall winners in the Junior category were Anoushka Hayward-New of Alma Park Primary with her story Loved And Lost and Sally Ainsworth, from Longdendale Community Language College, with her piece Meet Me In Coffin Meadow - an author from Manchester Children’s Book Festival will visit Sally and Anoushka's schools.

The range of talent within this room is astounding. To think that many of these young writers could be on the path to creating fine stories and literature is not far from reality. Congratulations to each and every one who sent their stories in to be looked at and to those who made the final collection within the two anthologies.

And if you're a creative young writer who feels inspired, here are some new projects for under 18s in 2012:
The Midland Future Manchester Young Writers Competition 2012, in partnership with Manchester Literature Festival, Manchester Children’s Book Festival and Manchester Science Festival.
Manchester Children’s Book Festival 2012 will include writers such as Philip Pullman, Michael Rosen, Jacqueline Wilson, Cathy Cassidy and many more.
Portico Young Writers' Prize
And of course, the All Write! Competition 2012.

Kevin Danson is an English Literature student at MMU. Read his blog Pebbleddash and follow him on Twitter @pebbleddash.
Posted by MLF Blog at 10:42 AM

thegreenstop said...
This comment has been removed by a blog administrator.
December 2, 2011 at 11:34 AM