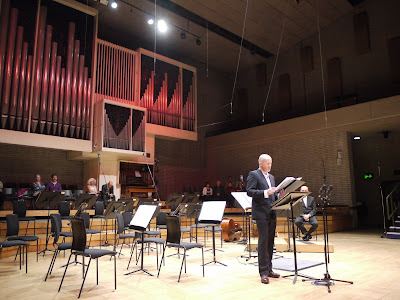 Have you ever had a moment when it seemed as though some piece of music, some set of words, reached inside of you, read the heart of your being, and expressed it with a beauty you could never possibly imagine? This must have been how the audience felt at the end of Portrait Of Music & Words, performed by the Manchester Camerata on Saturday in the Royal Northern College Of Music’s ultra-modern concert hall.

As part of the Manchester Literature Festival, award-winning poet Michael Symmons Roberts was asked to produce poems based on a piece of music. This, he tells us at the beginning of his segment, is unusual. It’s more normal for the words to come first, and the music be woven around them. Indeed, he is speaking after we’ve been treated to Mozart’s Alma Grande e Nobil Core, sung by Rebecca. His poetry is surrounded by music, and by the chamber orchestra itself, both physically and metaphorically.

When commissioned, Michael chose Benjamin Britten’s Les Illuminations as inspiration. Oddly, Les Illuminations was originally inspired by the poetry of Arthur Rimbaud, so in writing poetry inspired by music itself drawn from words, Michael brought the piece full circle. His four poems of 15 lines each reflect the feeling of the evening as a whole, a mix of the fantastical, chimerical, ethereal, earthy, funny and grief-stricken. Both the poems and their inspiration remind the listener of Mervyn Peake’s Gormenghast in their multi-faceted portrait of a crazy, wild, circus of a world.

Michael’s four pieces focus on the Hotel Splendide, a location within Les Illuminations, and I immediately imagine somewhere like Manchester’s Midland Hotel, where a porter nods off to sleep in the middle of the night, lovers unite, a child sees something unexpected in the grounds, and, finally, a whole new world is created by a fire alarm set off during the making of a crème brulée. This dance between the mundane and the fantastical flows seamlessly into the music itself, and we’re all carried away by the lively Camerata playing Les Illuminations itself.

The Camerata, led by Music Director Gabór Takács-Nagy, is a bright and engaging chamber orchestra, the musicians clearly excited and energised during their playing. Gabór himself is an expressive conductor, at one moment standing to attention, then the next almost leaping over to the cellists to bring out deeper notes. When he speaks to the audience, it is about the emotional intensity of the pieces, their personal meaning to him and the power they have to convey the richness of human experience.

The second half of the performance features two of Mozart’s arias, both expressing tenderness and deep love, again sung by Rebecca. She is a perfect compliment to the orchestra, expressive in her approach to both the Mozart and Britten pieces. We’re treated to a wealth of languages through the night, from the English of Michael’s poetry to Rimbaud’s French and Mozart’s Italian and German. The mood flows from the lilting aria into the much angrier and anguished 40th Symphony in G Minor.

Gabór introduces us to the symphony written after Mozart lost his daughter and struggled with debt and personal difficulties. Out of this pain and anger comes a powerful, stomping symphony that carries the audience away completely, along with the musicians themselves. The leader of the orchestra himself bounces out of his seat with his violin while Gabór jumps, strides, leaps and almost dances in front of his lectern. The applause goes on so long, we are offered a reprise of the 3rd Movement, a minuet that storms and kicks and rails at the world, before the night is out.

This is the kind of event that reminds you that even the darkest and most terrible emotions and moments in our lives can be converted to something beautiful. We’ve been through every possible emotion and experience, drawn out through words and music of exceptional quality. Gabór and Michael have an infectious love of what they do and have presented a fascinating and beautiful vision of the human world and everything in it.

Joely Black is an author and writer living in Manchester. She writes for various online and offline magazines and has completed a series of fantasy novels under the title Amnar. She runs a local book club as part of the wider Greater Manchester Skeptics Society and has given talks there and elsewhere on various subjects.
Posted by MLF Blog at 11:39 AM