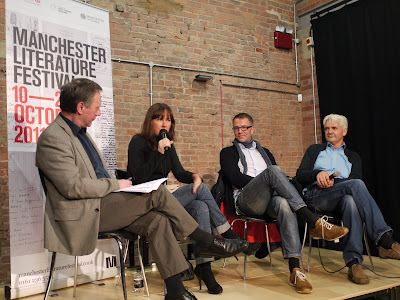 Torrential rain bounces off the paving slabs outside, and cloaked figures huddle in dark street corners. A group of strangers huddles together in the chapel-like confines of the International Anthony Burgess Foundation. The perfect setting for a talk by three Scandinavian crime writers.

Although the three featured writers may not be household names in the UK, they represent a burgeoning genre. We can watch Scandinavian crime adaptations on the TV (Wallander and The Killing) or at the cinema (The Millennium Trilogy), and billboard adverts for the latest Jo Nesbo can be found at train stations across the country. It’s not all about blockbusters either; as KO Dahl points out, there are around 40 new Scandinavian writers being published each year, and every large bookshop will have a Scandinavian crime section.

The event is set up as a panel session, hosted by Barry Forshaw, an expert who has written books on the genre. Each writer is given a brief introduction, but there are no readings this evening – unfortunately this makes it difficult for attendees who are interested in the subject, but have not read the individual authors, to get a feel for their work. It is interesting, though, to hear three writers discussing the writing process, their early attempts at writing, and their attempts to carve a niche for themselves in the genre fiction market.

It is surprising, for example, to hear KO Dahl admit that he "doesn’t really know" Frank Frølich, the character who has featured in eight of his novels to date, and that he sees murders as a means to an end. All three writers also reject the genre clichés of investigators with superhuman abilities, and drunken, depressive detectives. To stand out from the crowd, they react in different ways, focusing on female lawyers, or policemen who live with their parents.

The star of the evening is undoubtedly Yrsa Sigardurdottir, who charms the crowd with her witty comments. When asked whether Scandinavian crime writing was inherently left wing, she replies that in her native Iceland, "corruption is so low-level and boring – no one would kill for that type of corruption". Later, she is asked about her approach to sex scenes, and responds "Iceland is so small that everyone I know reads my books – so my main character cannot have sex, because people associate her with me."

The authors also talk interestingly about the process of having their work translated, and the need to let go of control and trust your translators. They reveal that the Scandinavian vocabulary is less broad than English, making their work occasionally appear stilted when we read it.

There are some missed opportunities, however. Although the authors are engaging when discussing the genre in general, they are not well known enough to carry the audience when talking about their own work, some of which was not even available in English. I also found it strange that the subject of Anders Breivik was not raised; fortunately, as the audience and authors congregated in the bar afterwards, I was able to ask Dahl if he thought there would be a literary response to the events of July 22. He replied that he knew of books being written at the moment which dealt with a Breivik-like central character.

Overall, the event was an interesting introduction to a genre of fiction writing which is enjoying almost unprecedented popularity at the moment, and it was illuminating to see the authors describe the merits of crime writing. For Dahl, crime writing is the perfect way of exploring society, cutting across class divides; the murders are simply a mechanism for creating interest in a character, and the investigation allows the reader a complete overview of an individual’s life and loves. All three rejected charges of goriness or sensationalism. If there was anything unsatisfying about the event, it was the struggle for the host to find a balance between his expert knowledge of the texts, and the more casual interest of many attendees. Still, the Waterstone’s table was doing good business afterwards, and the authors were signing plenty of books for happy attendees.

Thom Cuell writes about books, art and theatre at the Workshy Fop blog.
Posted by MLF Blog at 4:43 PM