Taking a thought for a walk... 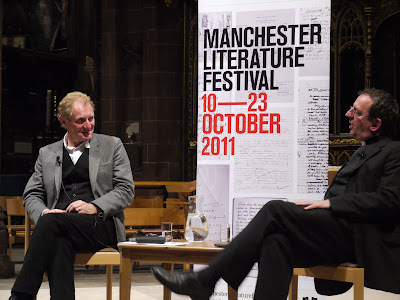 In his introduction to one of the major opening events of this year’s Manchester Literature Festival, Canon Andrew Shanks made an unusual request: following the author’s performance, there was to be “no applause... just a moment of meditative reflection”. For this was no ordinary literary reading or lecture, but a sermon, with all the reverential customs and cultural associations of that particular kind of oration. Sir Andrew Motion (pictured, left) was tasked with delivering MLF’s now annual Manchester Sermon, an event conceived with the aim of reaffirming the “rich, imaginative potential” (Shanks) of the sermon and reviving for contemporary secular society this neglected literary form once so central to British culture. His challenge was an unenviable one: to follow Jeanette Winterson’s electrifying inaugural sermon at last year’s festival.

If Motion felt daunted by his weighty brief or by the magnificent surroundings of Manchester Cathedral on Tuesday evening, he did not show it. The decade of laureateship which equipped him to perform at the twenty-first birthday parties of young royals (an experience which he might rather forget) has produced a consummate and professional performer, unfazed by the expectations of the 200-strong “congregation” before him. Following a beautiful performance by the Manchester Cathedral Choir, Motion took to the pulpit to begin what he modestly described as a “determined doodle” or, referencing the artist Paul Klee, “taking a thought for a walk”. If there was a sense of wandering in this sermon, it was of a distinctly affable sort, dignified by Motion’s rich, mellifluous baritone and humble, even apologetic air. The word “sermon” may derive from the Latin word sermō, meaning “discourse”, but it is also linked with the word serere, or “to join together”. While Motion’s sermon may have meandered amiably in its discourse, it certainly “joined together” – poetry and faith, public and private, preacher and congregation.

Opening with the Book of Ruth, Motion quoted Ruth’s words to Naomi upon following her back to Israel from the land of Moab: “Entreat me not to leave thee; thy people shall be my people and thy God my God.” Motion then expanded these Biblical beginnings to encompass artistic creation. He identified in them an enduring need for human connection which has affinities with the eternal dilemma of the emigrant, as well as that of the artist: the requirement of total self-immersion in something, or someone, other. Like Ruth and like the emigrant, the author must to some extent subsume his or her own identity in order to be absorbed into another, imaginative world. The “effort to escape one’s ego” is vital to the success of a poem; yet for Motion, this act of self-sacrifice is as much one of self-preservation as of self-denial. Here Motion adopted Keats’ famous declaration that poets are “chameleons”, altering their own shape to allow their poem its own independent existence. “We hate poetry that has a palpable design upon us,” wrote Keats in 1818. “Poetry should be great and unobtrusive, a thing which enters into one's soul, and does not startle or amaze with itself, but with its subject.”

From this point onwards, Motion’s sermon became a rumination on the poetic impulse which, despite being frequently clothed in the language of academia, he described as a “basic, primitive” human urge. Liberated from the shackles of his laureateship, Motion made an impassioned attack on Tory policy in relation to literacy and culture, criticising recent library closures and savage cuts to the arts budget. The educational curriculum also came under fire: “Why do so many of our school children leave school thinking that poetry is not for them?” He attributed this resistance partly to our exam-focused teaching system and partly to people’s distrustful need to “define” or “explain away” a poem. Instead, Motion advocated the necessity of playfulness, ambiguity and anti-utilitarianism in language. And here he found his religious analogy: poetry, like faith, is not an exact science; it requires the reader (or the believer) to accept simultaneously the known and the unknown. This extends to poetic composition: in Motion’s own writing, the creative impulse is transient; it comes and goes like his religious faith. As with prayer, the writer must “keep his mind open, his muscles ready” for that moment when everything aligns to allow, for want of a better word, communion.

And with that, preacher Motion stepped down from his pulpit to take part in a lively post-sermon discussion chaired by the excellent Reverend Richard Coles (pictured, right). Coles was an appropriate choice of host: for many listeners to Saturday Live, the programme he presents, he personifies that other Voice of God: Radio 4.

Eleanor Crawforth works for the Manchester-based publisher Carcanet Press, where she is Sales & Marketing Manager and Assistant Editor. She co-edited the Carcanet anthologies New Poetries IV (2007) and New Poetries V (2011) and writes for the literary magazine PN Review. Follow the Carcanet blog here.