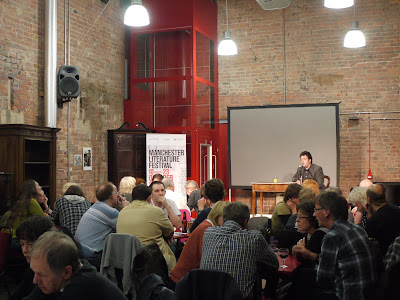 On another weirdly warm October night, the doors are closed and curtains drawn in the IABF as teams cluster around tables for this year’s Manchester Literature Festival quiz night with writer and host of BBC Radio 4’s The Write Stuff James Walton, also author of the handy literary quiz book, Sonnets, Bonnets & Bennetts. James is the creator of this year’s quiz, made up of six rounds with 10 questions each and random bonus questions thrown in. On top of that, he torments us with an occasional twist in certain rounds when giving the answers.

Each round has a theme; bestsellers, food and drink, sport and the like. We sit, anxiously waiting to show our literary knowledge to one another and maybe even shock ourselves. In all honesty, from round one I discover my choice of literature has been entirely off the mark, except of course for the Twilight series - worth one question. My team appears to be better equipped than I, though silence and frozen stares tell me they too may soon collide with the same brick wall I have.

Q. Which current bestseller opens July 15th 1988?
Many of the teams scribble immediately onto the sheet of paper. I on the other hand admire the renovated building I am sitting in and the pieces of antique furniture scattered about the room. With the difficulty of the questions comes an amplified volume of oooooooos and aaaaaaaaaas. These people love a challenge, forcing their minds to dig deep within those chests and vaults kept at the back of their thinkers. I will have to empty mine out and start again.

Q. Who wrote the short story; The Loneliness Of A Long Distance Runner?
My team is wide-eyed. A small team of two young ladies appears unabashed as the questions are read. In the third round a helpful twist comes to our aid; the final letter of an answer will be the start of the next answer. This seems to work in our favour at the beginning, then we go back to our standard inter-gawking. I’m trying to decipher lip movements from the team at the other end of our table but alas, I have yet to acquire this skill. I have a clear view of one of this year’s Manchester Blog Awards’ winners, Benjamin Judge, but he’s speaking tight-lipped. Does he know what I’m trying to do?

The 1960s rock band Steppenwolf was named after a novel by which author?
As the rounds progress the pressure multiplies the number of empty bottles on top of tables. The last round brings with it the harshest rules of the night, received with grumbles and shifting chairs; If you get any answers wrong, including the bonuses, you lose the points for the whole round. Nonetheless, James does let us leave a blank if we are unsure. The teams release their breath.

Q. Who wrote the novel The Sporting Life?
Q. Which novel contains the characters Dr Slop and Yorick?
Q. Whose second novel was called Human Croquet?

So many varied questions and, fortunately, so many well-read partakers to tackle them. The final round ends and the judges huddle into their corner to add up for the grand finale. I am pleased to say we didn’t come last, though very, very close.

The final four are as follows:
4th – joint position from teams James Draper and The Iliterati
3rd – The Lancs Team
2nd – Five And A Baby
And, for a second year running, first place is awarded to brainboxes The Librarians. They are presented with a bottle of champers and copies of Claire Tomalin’s biography, Charles Dickens: A Life.

Even though I leave perplexed from the amount of catch-up reading I have to do from now on, it has been a very fun night and I have had the pleasure of meeting the extremely delightful Emma Jane Unsworth, author of Hungry, The Stars And Everything and the spellbinding Zoe Lambert, author of The War Tour. A lovely end to an evening and to this year’s Manchester Literature Festival. Well done to all who took part!

Kevin Danson is an English Literature student at MMU. Read his blog Pebbleddash and follow him on Twitter @pebbleddash.
Posted by MLF Blog at 12:39 PM